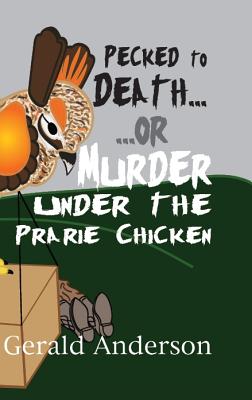 Pecked to Death... or ... Murder Under the Prairie Chicken (Palmer Knutson Mystery #3) (Paperback)

Everybody wants Homer Grimstead’s land. Unfortunately, someone was willing to kill for it.The Otter Tail Bird Watching and Conservation Society, or the O.T.B.W.A.C.S., wants to protect and watch birds on Homer’s land. The bird in question is the T. phasianellus campestris, aka. the prairie chicken.  Fergus Falls Fin and Feather Club, or the F.F.F.F., however, has a different plan in mind. They want to ­acquire the land with the intent to hunt the prairie chickens. To the Western Minnesota Farmers Energy Coopera­tive, however, that same piece of real estate is a perfect combination of location and resources for a state-of-the-art, $80,000,000 ethanol plant. When hunting, bird watching, and business collide, somebody is bound to get hurt . . . and someone does. A dead body is found underneath the giant prairie chicken in Rothsay. Now that complicates things.

Gerald Anderson is an adjunct professor of history at Minnesota State University Moorhead. His academic titles include Fascists, Communists, and the National Government and a two volume Study Guide to the Western Perspective. The Uffda Trial, an historical novel, was published in 1994. Previous titles include Death Before Dinner, Murder Under the Loon, and Pecked to Death . . . or . . . Murder Under the Prairie Chicken..
or
Not Currently Available for Direct Purchase
Copyright © 2020 American Booksellers Association