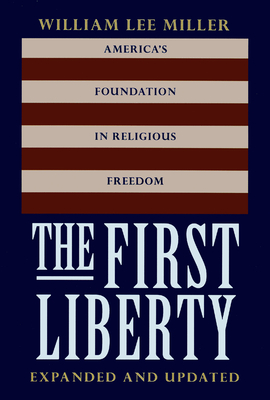 At a time when the concept of religion-based politics has taken on new and sometimes ominous tones--even within the United States--it is not only right, but also urgently necessary that William Lee Miller revisit his profound exploration of the place of religious liberty and church and state in America. For this revised edition of The First Liberty, Miller has written a pointed new introduction, discussing how religious liberty has taken on deeper dimensions in a post-9/11 world. With new material on recent Supreme Court cases involving church-state relations and a new concluding chapter on America's religious and political landscape, this volume is an eloquent and thorough interpretation of how religious faith and political freedom have blended and fused to form part of our collective history-and most importantly, how each concept must respect the boundaries of the other.

Though many claim the United States to be a "Christian Nation," Miller provides a fascinatingly vivid account of the philosophical skirmishes and political machinations that led to the "wall of separation" between church and state. That famous phrase is Jefferson's, though it does not appear in the Declaration of Independence nor in the Constitution. But Miller follows this seminal idea from three great standard-bearers of religious liberty: Jefferson, Madison, and Roger Williams. Jefferson, who wrote the Virginia Statute for Religious Freedom, the precursor of the First Amendment of the Constitution; James Madison, who was politically responsible for Virginia's acceptance of religious liberty and who, a few years later, helped draft the Bill of Rights; and the even earlier figure, the radical dissenter Roger Williams, who propounded the idea of religious freedom not as a rational secularist but out of a deeply held spiritual faith.

Miller re-creates the fierce and vibrant debate among the founding fathers over the means of establishing public virtue in the absence of established religion--a debate that still reverberates in today's passionate arguments about civil rights, school prayer, abortion, Christmas cr ches, conscientious objection during warfare--and demonstrates how the right to hold any religious belief has dynamically shaped American political life.

William Lee Miller is now Scholar in Ethics and Institutions at the Miller Center of Public Affairs at the University of Virginia. He retired from the faculty of University of Virginia in 1999 as Commonwealth Professor, and the Thomas C. Sorensen Professor, of Political and Social Thought. He has taught also at Yale University, Smith College, Indiana University, and other institutions, often teaching courses in church and state and religious liberty, subjects on which he has often written. He served on the Fund for the Republics Commission on Religion and a Free Society in the 1960s. He has been an editor and writer on a political magazine, a speechwriter, and a three-term alderman. His books include Lincoln's Virtues: An Ethical Biography, and Arguing About Slavery: John Quincy Adams and the Great Battle in the American Congress.
Loading...
or
Not Currently Available for Direct Purchase