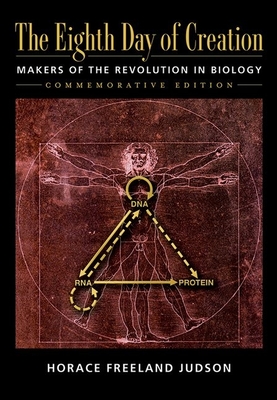 The Eighth Day of Creation

In this classic book, the distinguished science writer Horace Freeland Judson tells the story of the birth and early development of molecular biology in the US, the UK, and France. The fascinating story of the golden period from the revelation of the double helix of DNA to the cracking of the genetic code and first glimpses of gene regulation is told largely in the words of the main players, all of whom Judson interviewed extensively. The result is a book widely regarded as the best history of recent biological science yet published. This commemorative edition, honoring the memory of the author who died in 2011, contains essays by his daughter Olivia Judson, Matthew Meselson, and Mark Ptashne and an obituary by Jason Pontin. It contains all the content added to previous editions, including essays on some of the principal historical figures involved, such as Rosalind Franklin, and a sketch of the further development of molecular biology in the era of recombinant DNA.