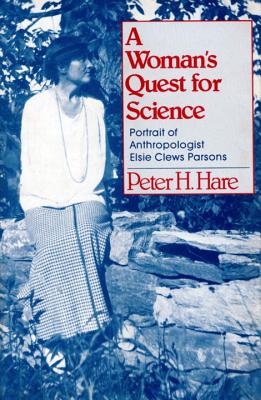 A Woman's Quest for Science

Before Margaret Mead, even before Ruth Benedict, it was Elsie Clews Parsons who paved the way as the first woman president of the American Anthropological Association. Born into a prominent New York family in 1874, Parsons showed early determination to be free of social constraints. Everything she did until her death in 1941 stemmed from her concern for the ways in which expression of personality is affected by social conventions. Her proposal of "trial marriage" in 1906 and even her pacifism in World War I (in association with Randolph Bourne) derived from that concern.
Her early sociological books were considered by H.L. Mencken to be an extraordinary "array of observations upon that powerful complex of assumptions, prejudices, instinctive reactions, racial emotions and unbreakable vices of mind which enters so massively into the daily lives of all of us." Her chief anthropological work, 'Pueblo Indian Religion', was described by Franz Boas, one of the founders of modern anthropology, as an "indispensable sourcebook for every student of Indian life."
Parson's personality was fascinating in its tensions and complexity. She was a feminist who admitted to prejudice against her own sex and seldom enjoyed the companionship of other women. She was devoted to her politically prominent husband from whom she never concealed her relationships with other men. However, her husband's companionship with another woman tormented her. Her publications ranged from iconoclastic propaganda to technical science. She loved rugged adventure in the wild, yet thrived on scholarly work. Though her convictions were passionately held, her voice was never raised. She made shrewd use of her personal wealth in supporting young anthropologists and also argued for socialism. She enjoyed exchanging riddles with black children as much as she enjoyed hobnobbing with Theodore Roosevelt or William Howard Taft. She was fiercely protective of the interests of her four children and also left much of their care to others. She took her beliefs and work seriously, yet delighted in being teased by such friends as Clarence Day (author of Life with Father), Judge Learned Hand, and anthropologists Alfred Kroeber, Robert Lowie, and Pliny Goddard.
Dr. Peter Hare draws on previously unavailable personal papers to present a vivid portrait of this fascinating woman, whose life story is surprisingly contemporary.