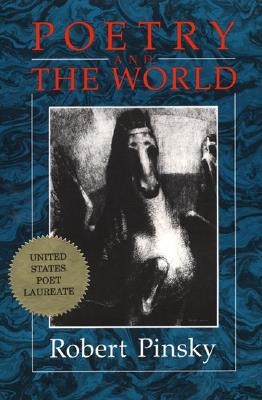 Poetry And The World

A collection of sharp, entertaining, and informative essays by poet Robert Pinsky, Poetry and the World is a passionate inquiry into poetry's place in the modem world. Combining the arts of criticism and autobiography, Pinsky writes about poets as diverse as Walt VVhitman and Philip Freneau, Marianne Moore and Frank O'Hara, about a visit to Poland during the early days of Solidarity, and his own childhood in a seedy New Jersey resort town. The scope and diversity of these essays confirm Pinsky's stature as not only one of our best poets, but as a perceptive and engaging critic as well.

Robert Pinsky was born on October 20, 1940 in Long Branch, New Jersey. He received a B.A. from Rutgers University in New Brunswick, New Jersey, and earned both an M.A. and Ph.D. in Philosophy from Stanford University, where he was a Stegner Fellow in creative writing, and studied under the poet and critic Yvor Winters

He is the author of several collections of poetry, most recently Gulf Music: Poems; Jersey Rain (2000); The Figured Wheel: New and Collected Poems 1966-1996 (1996), which received the 1997 Lenore Marshall Poetry Prize

He is also the author of several prose titles, including The Life of David; Democracy, Culture, and the Voice of Poetry (2002); The Sounds of Poetry (1998), which was a finalist for the National Book Critics Circle Award; Poetry and the World (1988); and The Situation of Poetry (1977). In 1985 he also released a computerized novel, Mindwheel.

Pinsky has published two acclaimed works of traslation: The Inferno of Dante (1994), which was a Book-of-the-Month-Club Editor's Choice, and received both the Los Angeles Times Book Prize and the Harold Morton Landon Translation Award

About his work, the poet Louise Glück

From 1997 to 2000, he served as the United States Poet Laureate and Consultant in Poetry to the Library of Congress. During that time, he founded the Favorite Poem Project, a program dedicated to celebrating, documenting and encouraging poetry's role in Americans' lives.

In 1999, he co-edited Americans' Favorite Poems: The Favorite Poem Project Anthology with Maggie Dietz. Other anthologies he has edited include An Invitation to Poetry (W. W. Norton & Company, 2004); Poems to Read (2002); and Handbook of Heartbreak (1998).

His honors include an American Academy of Arts and Letters award, both the William Carlos Williams Award and the Shelley Memorial prize from the Poetry Society of America, the PEN/Voelcker Award for Poetry, and a Guggenheim Foundation fellowship. He is currently poetry editor of the weekly Internet magazine Slate .

Pinsky has taught at both Wellesley College and the University of California, Berkeley, and currently teaches in the graduate writing program at Boston University. He lives in Cambridge, Massachusetts.