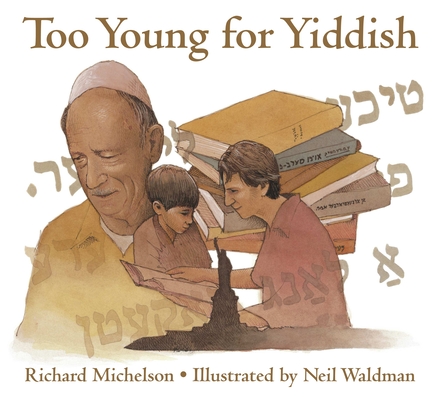 Too Young for Yiddish

Young Aaron wants to learn how to speak to the chickens like his Zayde (grandfather). Zayde's stories and his many books, with their mysterious worlds and their guarded secrets, fascinate Aaron. But always Aaron is too young to learn Yiddish. Zayde thinks that Aaron, and all the new generation of American Jews, should speak English and play baseball–just like all Americans do. When Zayde becomes very old and can no longer see well enough to read his precious books, Aaron decides it is time that Zayde teach him to speak to the chickens before it's too late. This poignant tale about preserving a dying language and the memories of the people who spoke it is also an eloquent tale of America. The importance of heritage and culture, and of honoring the past while building a future, is instilled in young minds through this touching story.

Richard Michelson is a prize-winning poet whose work has been praised by Nobel laureate Elie Wiesel as "deeply moving." His many children's books include TEN TIMES BETTER, A BOOK OF FLIES: REAL AND OTHERWISE and ANIMALS THAT OUTGHT TO BE, both illustrated by the late Caldecott Honor artist Leonard Baskin, and GRANDPA'S GAMBLE, illustrated by American Book Award winner Barry Moser. Richard now lives in Massachusetts with his wife and two children. He is the owner of R. Michelson Galleries, which represents many of the country's most prominent children's book illustrators.
Loading...
or
Not Currently Available for Direct Purchase