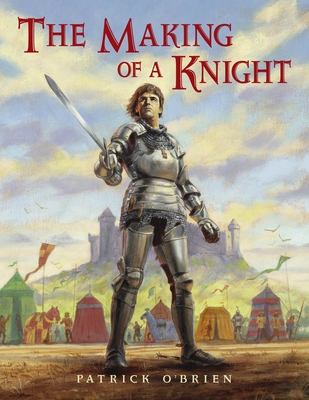 The Making of a Knight (Paperback)

Seven-year-old James wants to be a brave and noble knight like his father. He dreams of the day that he too will wear the golden spurs that symbolize knighthood. But before his dreams are realized, James must work for seven years as a page and for seven more as a squire, learning to ride, hunt, and fight.

Patrick O'Brien was raised a Navy "brat" and moved around a lot as a child, but now he calls Baltimore, Maryland, home. He grew up drawing and painting, but did not realize that he should be an illustrator until after he graduated from the University of Virginia with a degree in biology. He then attended art school at Virginia Commonwealth University and started a successful freelance career drawing storyboards for advertising agencies.
In addition to STEAM, SMOKE and STEEL, Patrick has illustrated several other children's books, including A WASP IS NOT A BEE (Holt), A PIRATE'S LIFE FOR ME, BOTTOMS UP: A BOOK ABOUT REAR ENDS (Holt), and GIGANTIC: HOW BIG WERE THE DINOSAURS (Holt).
or
Buy Here
Copyright © 2020 American Booksellers Association