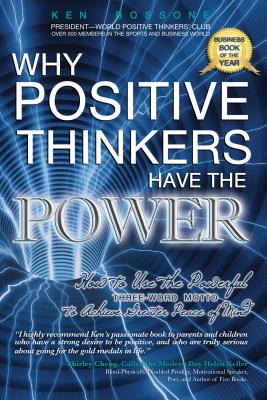 Why Positive Thinkers Have The Power

For ten years Ken Bossone, president of the World Positive Thinkers club, has been researching and writing about what the main ingredient is that all winners possess. Ken wanted to find out and write about what drove winners on in the face of defeat and adversity. Was it what they did or thought? Was it goals? Having goals is nothing new. Man has achieved goals since the beginning of time. Was it hard work? Everyone knows you must work hard to achieve goals. After all, the only thing that sits its way to success is a hen. Was it intelligence? Many brilliant people wind up on skid row, as Ken has interviewed them there. Was it wealth? Many wealthy people are unhappy and wind up committing suicide. And so the search went on. Then one night Ken watched a middleweight championship boxing match between Sugar Ray Leonard and his opponent, and after hearing the words Leonard’s opponent uttered Ken realized the words were the key to the secret. It hit Ken like a lightning bolt. That was his breakthrough and he researched furiously to prove he was on the right path. As Robert Frost, the great poet said, “Do not follow where the path may lead. Go instead where there is no path and leave a trail.” To Kens utter delight and amazement he realized unequivocally, after personally experiencing financial tragedy, a death threat, loss of drivers license and car, and other personal setbacks, and with much research, that the main ingredient coupled with goals is a three-word motto that all winners have imbedded in their very souls to achieve winning and happiness. As President of the World Positive thinkers club with over 500 sports and business winners Ken wants to share this amazing revelation with the world.

Ken Bossone is president of the World Positive Thinkers Club, which includes over 500 celebrities of the sports and business world, including Donovan McNabb, Tom Brady, Barry Bonds, and the late Dr. Norman Vincent Peale. Ken has written a series of positive input children’s book, and is a financial and business advisor with a flair for creating and evaluating business plans. For the past ten years he has put his sales career on hold to research and write about why people don't reach goals and to discover and share the real secret of those who do. During his research and ten year journey he discovered the three-word motto of all winners, which he happily promulgates in his book.
Loading...
or
Not Currently Available for Direct Purchase