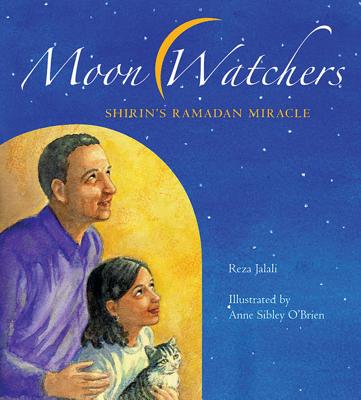 Looking through the tall trees in their backyard in Maine, Shirin and her dad search for a glimpse of the new moon, the sign that the month of Ramadan has begun. Ramadan is a time when Muslims around the world pray, fast, and pay special attention to doing good deeds. Shirin is nine and thinks she should be able to fast like her older brother Ali, but her parents feel she is still too young to go without food and water all day. When Shirin catches Ali sneaking food after school, she wonders: Should she tattle or is this an opportunity for a good deed? Shirin feels left out when the others break their fasts to have their own meals after dark and in the early morning, before it is light again. But then her grandmother tells a story that shows her a way she can feel more a part of Ramadan and the traditions and closeness her family enjoys during this special month of the year. Her good deeds result in a surprise for everyone!

For Muslim people around the world, Ramadan is a month-long time for prayer, fasting, and charity. This "month of blessing" is not viewed as a time of hardship but instead as a time to develop self-discipline and increase awareness of and compassion for the poor and the hungry. It is a time to deepen connection with Allah through prayer and community. For this much-anticipated month, Muslim people gather together in homes, shops, and restaurants to break their fasts and pray.

Islam uses a lunar calendar, so the timing of Ramadan depends on the cycles of the moon. Ramadan lasts a lunar month: from new moon to full moon and back to new moon. Ramadan always begins on the first night of the new moon of the ninth month of the year. Because the lunar calendar's months are shorter than the solar calendar's months, Ramadan appears to "move" from year to year. As a result, fasting (no food or water) during the winter months is not quite so much a challenge as fasting during long, hot summer days.

It is the custom to start the day with a pre-dawn meal called suhoor, then not eat or drink again until after the sun has set. That post-daylight meal is called iftar. Sharing these pre-dawn and post-sunset meals is an important part of community and family bonding, which is part of why Shirin feels a bit left out.

Ramadan is as important to many Muslims as Christmas and Easter are to many Christians, and Passover, Yom Kippur, and Rosh Hashanah are to many Jewish people. Ramadan ends with a gift-giving celebration called Eid ul-Fitr, which means "festival of breaking the fast."

Moon Watchers could promote conversations about:

Reza Jalali is a writer, educator, and a Muslim Scholar, who has
taught courses at the University of Southern Maine and Bangor
Theological Seminary. Jalali's books include New Mainers (©2009,
Tilbury), Moon Watchers (©2010, Tilbury), Homesick Mosque and Other
Stories, and The Poets and the Assassin. His children's book, Moon
Watchers, has received the Stepping Stone Multicultural Award. His
five-act play, The Poets and the Assassin, which is about women in Iran
and Islam, has been staged at Bates College, University of Southern
Maine, Bowdoin College, University of New England, and the Space
Gallery, among others. In May 2015, Jalali was featured in the National
Public Radio's popular program, The Moth Radio.

ANNE SIBLEY O’BRIEN has illustrated 31 books, including Talking Walls, and is the author and illustrator of the picture book I’m New Here and the graphic novel The Legend of Hong Kil Dong. Annie’s passion for multiracial, multicultural, and global subjects grew out of her experience of being raised bilingual and bicultural in South Korea as the daughter of medical missionaries. She writes the column “The Illustrator’s Perspective” for the Bulletin of the Society of Children’s Book Writers and Illustrators and a blog, “Coloring Between the Lines.” The mother of two grown children, she lives with her husband on an island in Maine.

Gr 1-4–This thought-provoking tale straddles American, Persian, and
Islamic cultures. Shirin, nine, watches for the moon signaling the start
of Ramadan. She is disappointed because she is too young to fast, but
her father encourages her to do good deeds. Jalali depicts the
Shia-Muslim form of prayer, which includes kissing a stone, and also
touches on the issue of women covering their hair. Throughout the story,
Shirin follows the waxing and waning stages of the moon and is
delighted when she gets permission to do half-day fasts and even more
pleased when it appears that she is able to cope with them better than
her brother. To her astonishment, she discovers him secretly eating. She
decides not to expose Ali and counts it as a good deed. As Ramadan
ends, the family prepares for Eid-ul-Fitr. O'Brien's watercolor
illustrations evoke a culturally authentic Persian-American aesthetic,
depicting warm characters in a family setting. An explanation of Ramadan
and Eid is given in the back matter. This is another wonderful
contribution to the slowly increasing collection of fictional books on
the observance of Ramadan and a great resource for librarians and
teachers.Fawzia Gilani-Williams, An-Noor School, Windsor, Ontario© Copyright 2010. Library Journals LLC, a wholly owned subsidiary of Media Source, Inc. No redistribution permitted.

This moving picture book for older readers about a young Muslim girl and
her family at Ramadan weaves together the traditional observance and
its meaning with a lively drama of sibling rivalry. In her backyard in
Maine, Shirin, 9, and her father watch for the new moon that starts the
holy month. Shirin begs to be allowed to fast, like her older brother,
Ali, 12, but she is furious when her family tells her she is too young.
Then her parents decide to let her fast for part of the day, and she is
thrilled. She also learns that Ramadan is about doing good deeds to help
others. The unframed, intricately detailed, mixed-media illustrations
show the siblings' ugly standoffs (Shirin's jealousy, Ali's smugness),
as well as the family at prayer, at the dinner table, and in warm
close-ups. Along with the information about the holiday, there is a real
story here: when Shirin helps Ali, it changes their relationship and
reveals the meaning of the holiday. Grades 2-4. --Hazel Rochman
— Hazel Rochman

Shirin lives in a suburban U.S. setting where she and her father can go
outside and spot the new moon as Ramadan begins. The nine-year-old wants
to fast this year after all, her 12-year-old brother is doing it but
her parents tell her that she is too young. Her grandmother comforts her
with a story about a boy who fasts part-time, and Shirin quickly
recognizes the boy as her father. She, too, begins in the same way, but
it is her new willingness to help others that leads to the changes in
her relationship with her sibling that create the small but important
miracle. Jalali is from Iran, but his story is about universal Muslim
practices, with a few specific details indicated in O Brien s intense
watercolors. The grandmother regularly wears a headscarf, while the
mother does not. Both adult women wear chadors during prayer, and the
grown-ups also use Shi ite heart-shaped prayer stones at the tops of
their prayer mats. This quiet story adds to the small collection of
books about Muslim families that can counteract the often harmful
messages seen in the media. (Picture book. 6-9)

Reza Jalali has crafted a culturally sensitive narrative that introduces
the reader to an important aspect of Islam: Ramadan. Nuances of culture
and tradition are skillfully woven into the storyline. I highly
recommend this book for teachers introducing diverse cultures from
around the world.
— Tami Al-Hazza, Ph.D., Old Dominion University

In this lyrical telling of a contemporary story about Ramadan, Shirin
watches the moon wax and wane with her father and learns to put sibling
rivalry aside. Moon Watchers is rich in detail about one Muslim family's
life. The warmth of the telling and themes like family traditions and
helping others will resonate with readers everywhere.
— Karen Lynn Williams, author of Galimoto; Four Feet, Two Sandal; and many other books for children