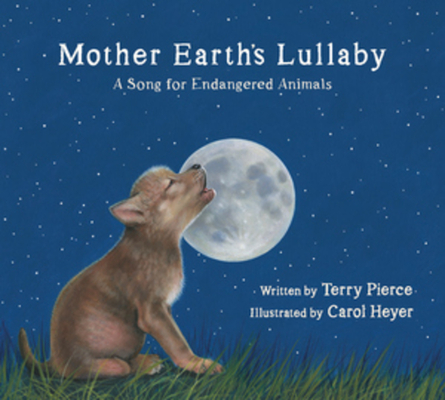 The bedtime book about endangered species

When Mother Earth bids goodnight, / the world is bathed in silver light. / She says, “Goodnight, my precious ones.” / Nature’s song has just begun.

Mother Earth’s Lullaby is a gentle bedtime call to some of the world’s most endangered animals. Rhythm, rhyme, and repetition create a quiet moment for children burrowing down in their own beds for the night, imparting a sense that even the most endangered animals feel safe at this peaceful time of day. In successive spreads, a baby giant panda, yellow-footed rock wallaby, California condor, Ariel toucan, American red wolf, Sumatran tiger, polar bear, Javan rhinoceros, Vaquita dolphin, Northern spotted owl, Hawaiian goose, and Key deer are snuggled to sleep by attentive parents in their dens and nests under the moon and stars.

Brief descriptions of each animal appear in the back of the book.

What did you like about the book? This bedtime informational story contains beautiful life-like endangered animal illustrations.  The backpages are full of facts that will make you want to help these animals. And the front cover of the red wolf howling in the moonlight feels like you are there and can hear him, “Ow-ooooling.” Anything you didn’t like about it? Would like to see the author and illustrator do a version that is not a lullaby.  This could be an amazing read aloud for elementary school when we research endangered animals. To whom would you recommend this book?  PK-2. If you like Almost Gone and Wide World you will like this. Who should buy this book?  public libraries, day-cares, home library Where would you shelve it ?  Picture books Should we (librarians/readers) put this on the top of our “to read” piles? yes

TERRY PIERCE (Ridgecrest, CA) was a Montessori teacher for 22 years before writing children’s books. Her 18 books include Tae Kwon Do! (Bank Street College Best Children’s Books of 2007); Blackberry Banquet; Mother Goose Rhymes (a 2007 AEP Distinguished Achievement Award Winner) and My Busy Green Garden. She is an instructor in the UCLA Extension Writers’ Program.

CAROL HEYER (Thousand Oaks, CA) has illustrated 28 children’s picture books including Humphrey’s First Christmas and Once Upon a Cool Motorcycle Dude, winner of eight state awards, as well as several Hank Zipzer books written by Henry Winkler. Formerly she was a production designer and writer of feature films including Thunder Run (1986), and she illustrated game materials for Dungeons & Dragons and the collectible card game Magic: The Gathering. Her art is included in the collections of  the Greisinger Middle Earth Museum in Switzerland and the Mazza Museum,  the world’s largest museum of original artwork by children's book illustrators, and has won awards from The Society of Children’s Book Writers and Illustrators, Spectrum, The International Competition for Fantastic Art, The Carnegie Art Institute, and The Society of Illustrators LA, among others.
Loading...
or
Not Currently Available for Direct Purchase