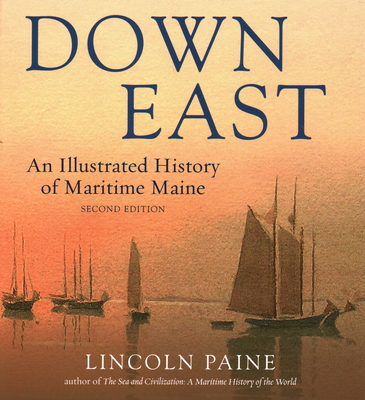 An Illustrated History of Maritime Maine

From the first explorers, to the century of ships, to our modern fisheries and diversification, Maine's maritime story is told in engaging detail.  Lincoln Paine has laid down the framework for an understanding of Maine's maritime history by relating the population and landscape of today to their historic foundations.

This engaging overview of Maine’s maritime history ranges from early Native American travel and fishing to pre-Plymouth European settlements, wars, international trade, shipbuilding, boom-and-bust fisheries, immigrant quarrymen, quick-lime production, yachting, and modern port facilities, all unfolding against one of the most dramatic seascapes on the planet. Down East can be read in an evening but will be referred to again and again. When the first edition was published in 2000, Walter Cronkite—a veteran Maine coastal sailor as well as The Most Trusted Man in America—wrote that “Paine’s economy of phrase and clarity of purpose make this book a delight.”

Paine went on to write his monumental opus The Sea and Civilization: A Maritime History of the World (PW starred review), but now returns to his first and most abiding love, the coast of Maine, to revise and update this gem of a book. The new edition is printed in a large, full-color format with a stunning complement of historical photos, paintings, charts, and illustrations, making this a truly visual journey along a storied coast.


Praise For Down East: An Illustrated History of Maritime Maine…

Such an introduction to a complex subject has its particular
challenges. Selection is everything. It must be complete but not smother us with
facts. What we want is the pithy remark, the significant detail, the compelling
and memorable generalization. And no dumbing down. Keep us awake, but tell us
what we need to know. Paine succeeds on every level.
— Clinton W. Trowbridge - Maine Times

This
engaging book, chronicling Maine’s maritime history from the first explorers to
our modern fisheries, can be read in an evening but will be referred to again
and again. Lincoln
Paine is the author of The Sea and
Civilization.
— Publishers Weekly starred review

Paine’s
economy of phrase and clarity of purpose make this book a delight.
— Walter Cronkite

and the breadth of his historical vision is
extraordinary.
— David Mitchell - GQ

The work is interspersed with prose and poetical
work from local “Mainers”, making it as much a discourse on maritime cultural
identity as it is an historical guide to the development of maritime Maine. It
also tends to depart from the “cold hard facts” of many maritime histories, drawing
more upon the emotive elements of the historical record.
— Nathan Richards - The Great Circle (Journal of the Australian Association of Maritime History

The
book’s intent is to give the general reader an enjoyable and accurate overview
of the state’s maritime history. The trick is to avoid duplicating other
historians and still make it useful to scholars and buffs…. Most writers would
have shrunk from the task or failed. Remarkably, Paine succeeds. How the writer
accomplishes this provides a pointed lesson to historical writers.
— William David Barry - Maine Sunday Telegram

It
has been my experience that histories packed with information are usually
temptingly easy to put down, and that readable ones are likely to be
superficial. Down East, however, has the uncommon virtue of being both
eminently readable and highly informative.
— Thomas S. Kane - The New Oxford Guide to Writing

Tradition has it that Maine breeds taciturn men
whose talk tells much without wasting a word. The author obviously respects
tradition, for this slim, graceful volume packs an impressive wealth of history
and geography, geology and ecology—all the elements that have shaped the people
and places of a singular state.
— Naval Institute Proceedings (U. S. Naval Institute)

Down
East
is a good introduction to the subject—lively without being either sensational
or overly detailed.
— Prof. John F. Battick - Nautical Research Journal, University of Maine

The
text is a masterful synthesis of maritime history, set within the broader
context of Maine history…. I believe it is the best introduction to the state
available.
— Prof. Joel Eastman, USM

LINCOLN PAINE (Portland, ME) is a maritime historian, lecturer, and curator; a trustee of the Maine Maritime Museum; and author of the award-winning The Sea and Civilization: A Maritime History of the World (2013) and Ships of the World: An Historical Encyclopedia (1997).
Loading...
or support indie stores by buying on