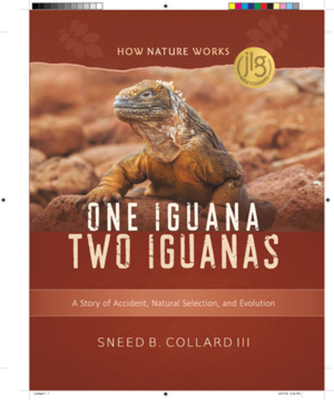 A Story of Accident, Natural Selection, and Evolution (How Nature Works)

A much-needed contribution to the children’s literature about evolution

Natural selection and speciation are all but ignored in children’s nonfiction. To help address this glaring deficiency, award-winning children’s science writer Sneed Collard traveled to the Galapagos Islands to see for himself, where Charles Darwin saw, how new species form. The result is this fascinating story of two species of iguana, one land-based and one marine, both of which developed from a single ancestor that reached the islands millions of years ago. The animals evolved in different directions while living within sight of one another. How is that possible?


Praise For One Iguana, Two Iguanas: A Story of Accident, Natural Selection, and Evolution (How Nature Works)…

STARRED REVIEW  The evolution of iguanas in the Galápagos provides a striking example of the workings of natural selection. This entry in the How Nature Works series explains how scientists have determined that two surprisingly different species evolved from a single ancestor. Collard's smoothly written text introduces two kinds of iguanas now living on these islands: a prickly pear-eating land iguana and a marine iguana that feeds on green algae underwater. He goes on to describe the volcanic origin of the archipelago and how plants and animals arrived. Drawing on well-grounded scientific conjecture (described in one of six informative sidebars), he then imagines the arrival of the first ctenosaur from Central America 8.25 million years ago and, after 3.75 million more years, the evolution of its algae-eating descendent. He introduces the theory of natural selection and, in another sidebar, explains how genes and their alleles contribute to individual differences. Returning to the continuing evolution of these two species, he shows how each has become perfectly adapted to its habitat. Finally he touches on other unique Galápagos inhabitants and the development of the theory of natural selection. A helpful map locates the Galápagos; images of its reptiles, birds, sea lions, and scenery will help readers picture the setting today. The attractive design makes good use of these well-reproduced photographs, some taken by the author. A fresh and accessible approach to an important scientific concept. (glossary, suggestions for further research, author's note)

Science writer Sneed B. Collard III (Missoula, MT; www.sneedbcollardiii.com) is the author of more than 80 children’s books, including One Iguana, Two Iguanasand Catching Air. He has received the Washington Post Children’s Book Guild Nonfiction Award for his body of work, and his books are featured regularly in the Junior Library Guild, NSTA/CBC Outstanding Science Trade Book lists, and other best-of lists.
Loading...
or support indie stores by buying on