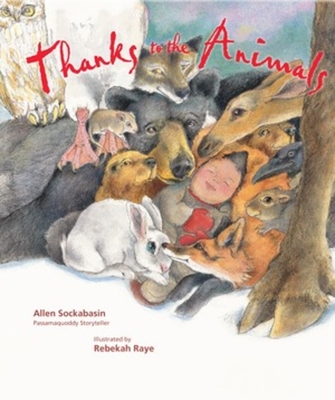 Thanks to the Animals

Little Zoo Sap and his family are moving from their summer home on the coast to their winter home in the deep woods. Unnoticed, the youngster tumbles off the end of the sled.

Alone, cold, and frightened, Zoo Sap cries, and his cries attract the forest animals. Beginning with beaver and ending with the great bald eagle, the animals rush to protect the baby and shelter him from the cold until his father returns for him.

Praise For Thanks to the Animals: 10th Anniversary Edition…

This delightful story is wonderful example of both the
subtle directness and the deep awareness of our relation to the natural world
that characterizes the very best American Indian traditional storytelling.  Allen’s voice is both gentle and strong.  I can’t think of a book I could recommend
more highly for anyone who wants to give a young reader a true picture of the
Native way of seeing, teaching, and understanding.
— Joseph Bruchac, author of more than 100 books, many of which reflect his American Indian (Abenaki) ancestry, including the young adult novel Killer of Enemies.

Sockabasin weaves a powerful story of paternal love while
simultaneously expressing the mutual respect between his Passamaquoddy culture
and the natural world.
— School Library Journal

Sockabasin’s tale is richly delineated by Raye’s evocative
images.  A tale for the seasons!
— Native Peoples

Allen Sockabasin is a Passamaquoddy who devotes much of his time to teaching and preserving the Passamaquoddy language.  A master musician, he has written, performed, and recorded Passamaquoddy stories and songs.  He has been a tribal governor, a member of the tribal council, director of child welfare for his tribe, and a health educator.  In 2010, he received the Sampson Center Catalyst for Change Award, which recognizes those who work for human and civil rights in Maine. His is the father of five grown children and a young son named Zoo Sap.

Rebekah Raye is an artist beloved for her bird and animal paintings and sculpture,
derived from her affinity with the natural world around her studio in East Blue
Hill, Maine. In Rebekah’s words, “My early interest in animals of all kinds
continues to be the focus of

my painting and sculpture. Our pet chickens, geese, and cats—as well as the
wild fox, bobcat,

crows, and deer—are my inspiration. The more I learn about the animals I
paint, the more I understand how we are all related.” Rebekah’s award-winning
children’s books include The Very Best
Bed, Bear-ly There, The Secret Pool, and Swimming Home, all published by Tilbury House.