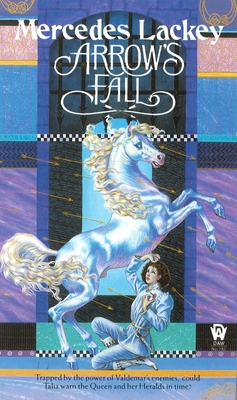 With Elspeth, the heir to the throne of Valdemar, come of marriageable age, Talia, the Queen’s Own Herald returns to court to find Queen and heir beset by diplomatic intrigue as various forces vie for control of Elspeth’s future.

But just as Talia is about to uncover the traitor behind all these intrigues, she is sent off on a mission to the neighboring kingdom, chosen by the Queento investigate the worth of a marriage proposal from Prince Ancar. And, to her horror, Talia soon discovers there is far more going on at Prince Ancar’s court than just preparation for a hoped-for royal wedding. For a different magic than that of the Heralds is loose in Ancar’s realm—an evil and ancient sorcery that may destroy all of Valdemar unless Talia can send warning to her Queen in time!

Praise for the Arrows Trilogy:

“Beautifully written.... Shows a sure touch with the wonder and adventure that characterize the best fantasy writers.” —RT Reviews

“The story is well told, and the major characters are well-drawn. As a whole, the trilogy offers evidence of Lackey’s...potential to become a major figure in the field.” —Booklist

“So well-crafted you’ll want read it an entire night. The Heralds are all people you know, or wish you knew.” —OtherRealms

“The kind of novel that belongs on every fantasy lover’s bookshelf…carefully wrought, entertaining reading by a brilliant and dedicated author.” —Midwest Book Review