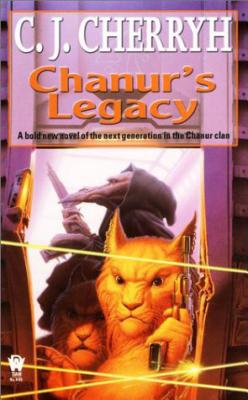 Hiffy Chanur, once a member of her aunt's crew on The Pride of Chanur, is now captain of her own vessel, Chanur's Legacy. It should have been the ideal existence for Hiffy, her fondest dream fulfilled, but instead the young captain's increasingly hard-pressed to take care of her ship's business.
So when Meetpoint's stationmaster offers her a million credits to transport a small, mysterious, "religious" object it seems like a golden opportunity—perhaps even too good an opportunity.... Yet despite her misgivings, Hiffy feels it's a comission she can't turn down. But soon she and the Legacy are caught in an ever-tightening web of intrigue. And only time will tell whether the young captain can determine who is her ally and who is her enemy in this deadly game of interstellar politics...

C. J. Cherryh planned to write since the age of ten. When she was older, she learned to use a type writer while triple-majoring in Classics, Latin and Greek. At 33, she signed over her first three books to DAW and has worked with DAW ever since. She can be found at cherryh.com.
Loading...
or
Not Currently Available for Direct Purchase