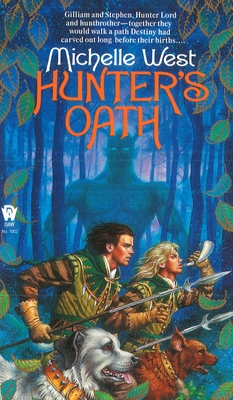 When the covenant was made with the Hunter God, all who dwelt in Breodanir swore to abide by it. The Hunter Lords—and the hunting dogs to which their minds were specially attuned—would seek out game in the God’s woods to provide food for their people, and the Hunter God would ensure that the Hunters, the land, and the people prospered.

But in payment, once a year the Sacred Hunt must be called, the God’s own Hunt in which the prey became one of the Lords, or his huntbrother.  This was the Hunter’s Oath, sworn by each Lord and his huntbrother—the companion chosen from the common folk to remind each Lord of his own ties to humanity. It was the Oath pledged in blood by Gilliam of Elseth and the orphan boy Stepehn—and the fulfillment of that Oath would lead them to the kind of destiny from which legends were made…

Michelle West is the author of three interconnected series: The Sacred Hunt duology, the six-volume Sun Sword series, and The House War novels. She has published numerous short stories, as well as fantasty novels, under her maiden name, Michelle Sagara. She was a two-time nominee for the Campbell Award. She works part-time at BAKKA Books, one of Toronto's larger bookstores, and writes a column for The Magazine of Fantasy & Science Fiction. She can contacted via her website, michellesagara.com.
Loading...
or
Not Currently Available for Direct Purchase