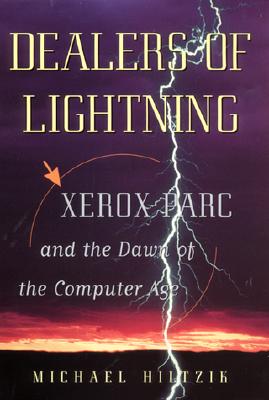 Xerox PARC and the Dawn of the Computer Age

Dealers of Lightning is the riveting story of the legendary Xerox PARC--a collection of eccentric young inventors brought together by Xerox Corporation at a facility in Palo Alto, California, during the mind-blowing intellectual ferment of the seventies and eighties. Here for the first time Michael Hiltzik, a correspondent for the Los Angeles Times, reveals in piercing detail the true story of the extraordinary group that aimed to bring about a technological dawn that would change the world--and succeeded.

Based on extensive interviews with the scientists, engineers, administrators, and corporate executives who lived the story, Dealers of Lightning takes the read on a journey from PARC's beginnings in a dusty, abandoned building at the edge of the Stanford University campus to its triumph as a hothouse of ideas that spawned not only the first personal computer, but the windows-style graphical user interface, the laser printer, much of the indispensable technology of the Internet, and a great deal more. It shows how and why Xerox, despite its willingness to grant PARC unlimited funding and the responsibility for developing breakthroughs to keep the corporation on the cutting edge of office technology, remained forever unable to grasp (and, consequently, exploit) the innovations that PARC delivered--and it details the increasing frustration of the original PARC scientists, many of whom would go on to build their fortunes upon the very ideas Xerox so rashly discarded.

More than just a riveting historical narrative, Dealers of Lightning brings to life an unforgettable cast of characters. Among them:

Dealers of Lightning is an unprecedented look at the ideas, the inventions, and the individuals that propelled Xerox PARC to the frontier of technohistory--and the corporate machinations that almost prevented it from achieving greatness.

Michael A. Hiltzik is a Pulitzer Prize-winning columnist for the Los Angeles Times. In 2004 he won a Gerald Loeb Award, the highest honor in American financial journalism. Hiltzik is the author of Dealers of Lightning: Xerox Parc and the Dawn of the Computer Age and A Death in Kenya. He lives in Southern California with his wife and two sons.