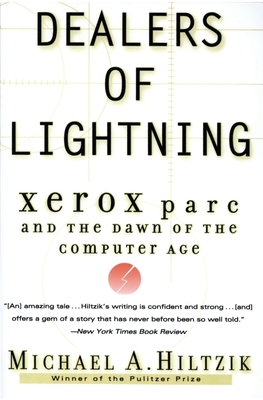 Xerox PARC and the Dawn of the Computer Age

In the bestselling tradition of The Soul of a New Machine, Dealers of Lightning is a fascinating journey of intellectual creation. In the 1970s and '80s, Xerox Corporation brought together a brain-trust of engineering geniuses, a group of computer eccentrics dubbed PARC. This brilliant group created several monumental innovations that triggered a technological revolution, including the first personal computer, the laser printer, and the graphical interface (one of the main precursors of the Internet), only to see these breakthroughs rejected by the corporation. Yet, instead of giving up, these determined inventors turned their ideas into empires that radically altered contemporary life and changed the world.

Based on extensive interviews with the scientists, engineers, administrators, and executives who lived the story, this riveting chronicle details PARC's humble beginnings through its triumph as a hothouse for ideas, and shows why Xerox was never able to grasp, and ultimately exploit, the cutting-edge innovations PARC delivered. Dealers of Lightning offers an unprecedented look at the ideas, the inventions, and the individuals that propelled Xerox PARC to the frontier of technohistoiy--and the corporate machinations that almost prevented it from achieving greatness.

Michael A. Hiltzik is a Pulitzer Prize-winning columnist for the Los Angeles Times. In 2004 he won a Gerald Loeb Award, the highest honor in American financial journalism. Hiltzik is the author of Dealers of Lightning: Xerox Parc and the Dawn of the Computer Age and A Death in Kenya. He lives in Southern California with his wife and two sons.