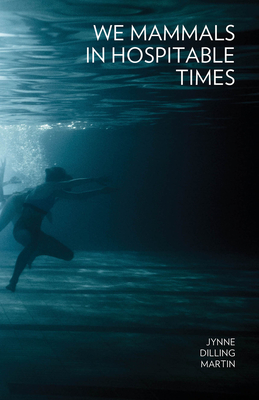 We Mammals in Hospitable Times

We Mammals in Hospitable Times rushes headlong into an awfully dangerous planet: a spinning rock in outer space called Earth, where the smallest zoo animals are forgotten in fires, cats flee vacuums, lovers betray and abandon one another, basements flood as the globe warms, and an adopted parrot shrieks unfamiliar names. The narrator of these poems wavers between wary—“sometimes I mix up fear with hissed instructions”—and wide-eyed, wanting desperately to make sense of all this perplexing behavior.   Sometimes paranoid, occasionally manic, often very funny, these poems consult archaeologists, biologists, psychiatrists, encyclopedias and even aliens, trying to understand how so many disparate things can be interrelated. And even as the poet reaches some grim conclusions about our collective fate, this sense of doom only increases her awe at the strange and fleeting beauty that surrounds us, whether it be gams of satiny whales, the shiny pink hill made by microwaved bologna, or the cyanobacteria of an Antarctic lake radiating orange light.   With this highly anticipated debut, Jynne Dilling Martin delivers poetry that offer armfuls of empathy, curiosity, and spiritual force.

JYNNE DILLING MARTIN’S poetry has appeared in Granta, The Boston Review, Ploughshares, Slate, and on the PBS NewsHour with Jim Lehrer. Her nonfiction has appeared in Glamour, Food & Wine, and The Antarctic Sun. She was a 2013 Antarctica Writer in Residence and lives in New York City.