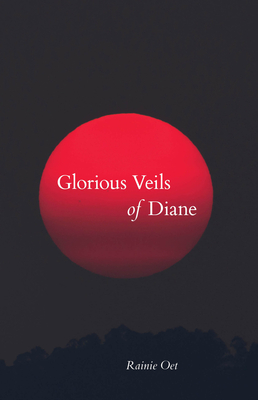 Glorious Veils of Diane is about the weird way children turn themselves inside out on the world, and a reimagining of the author’s own childhood. Diane is an ever-changing archetype, a self-conscious child who's seen too many horror movies and is discovering, for the first time, her own blood. A child who thinks she is God, and who sees every person in her life as an extension of herself. A child who is possessed, beloved, and ignored. The book emerges through a chorus of voices belonging to Diane, the people around her, and blood itself. At some point, Diane disappears. The book then investigates that disappearance, jumping back and forth through time, the physical world, and the spirit world. Ultimately, it suggests that Diane is not what is behind the veils; Diane is the veils.

Rainie Oet is a brilliant new writer with the power to make you see things you've never seen before with stunning clarity. Glorious Veils of Diane is a mysterious beauty, a fiery wonder.

Rainie Oet’s Glorious Veils of Diane is a revelation, a reveling both unpredictable and terrifyingly familiar—in prose poems that stain the mind long after reading. For Diane, horror is a comfort, a realm of safety to a trans body made monstrous to itself. Choral and haunting, images and language fragments fold in and out of this story, and Oet unsettles with an artful grace.
— Chase Berggrun

Rainie Oet is a nonbinary writer and game designer, former editor-in-chief of Salt Hill Journal, and the author of two previous poetry titles: Porcupine in Freefall and Inside Ball Lightning. They won the Puerto Del Sol Poetry Contest in 2019. They have an MFA in Poetry from Syracuse University, where they were awarded the Shirley Jackson Prize in Fiction. Read more at rainieoet.com.