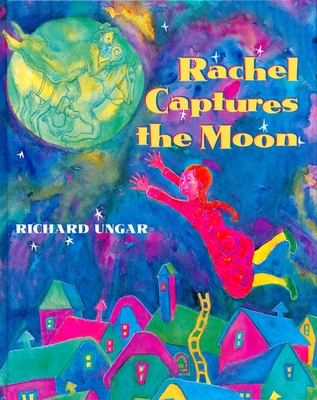 The stories of the fabled village of Chelm and its inhabitants are favorites in Jewish folklore. Newcomer Richard Ungar captures the joyous spirit of these folktales in his words and pictures.

The people of Chelm were crazy about the moon and the way it bathed the village in light. Not content to wait for the moon to rise, some of the villagers decide to capture it so they could see it whenever they wish. First the carpenter tries to reach it with a ladder. The next night the cook tries to entice the moon with soup. The musician, the weaver, and the fisherman all use their arts to try to lure the moon down to the village. To everyone’s surprise, young Rachel succeeds. But how does she capture the moon?

Richard Ungar has completed his first book for Tundra, after studies at the Ontario College of Art, the Jerusalem School of Fine Art, and with Toronto artist Mark Thurman. Originally from Montreal and a lawyer by profession, Mr. Ungar lives with his wife and two boys in Toronto, where he is at work on his next book.

Praise For Rachel Captures the Moon…

“With dense, jewel-toned watercolors and colored-pencil illustrations, and characterizations and perspectives reminiscent of Chagall and other Jewish visual folklorists, Ungar swiftly and affectionately transports readers to a mythical, long-ago world.”
–Publishers Weekly

“Ungar’s small black and white pictures give appealingly realistic vignettes of characters, while the brilliantly coloured main pictures are exuberant celebrations of village life with a nod to Chagall. His text conveys the relish of the storyteller.”
–Quill & Quire

“Richard Ungar has written a book about Chelm that you will really enjoy...Ungar not only wrote the story, but drew the pictures, too. And they are wonderful: full of rich blues, greens, oranges, hot pinks, purples and reds. This is a very funny book, and it is well worth reading.”
–Canadian Jewish News

“…[a] marvelous adaptation…it is Unger’s illustrations – watercolour and coloured pencil on paper – that make this book as lustrous and heart-warming as the fullest, brightest moon…They empower every setting and embrace the lead characters, including the moon, in all their eccentric splendour…Rachel Captures the Moon is a not-to-be-missed outstanding contribution to Jewish-content children’s literature by a Canadian author-illustrator and publisher. Rush out and buy it today.”
–Ottawa Jewish Bulletin

“The plot of the story celebrates common sense, but the illustrations invoke a nighttime world of imagination, and the combination works beautifully.”
–CCL
or
Buy Here
(This book is on backorder)
Copyright © 2020 American Booksellers Association