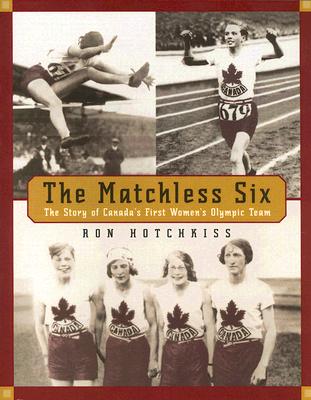 It is July 1928, and Canada’s first women’s Olympic team — “The Matchless Six” — is heading to Amsterdam, the site of the ninth Olympiad of the modern era. Canada’s finest female track-and-field athletes, having survived rigorous training and the grueling selection process at the Olympic Trials, were determined to take their big talent and big dreams to the top. Meet Jane Bell, Myrtle Cook, Bobbie Rosenfeld, and Ethel Smith, the “Flying Four” who comprised Canada’s first relay team; Ethel Catherwood, the “Saskatoon Lily,” who became the champion high-jumper and the most photographed female athlete at the Olympic Games; and Jean Thompson, the youngest member of the team at seventeen, who became one of the world’s most outstanding middle-distance runners. It was an impressive achievement:

“A team of six from Canada, a country of less than ten million, competed against 121 athletes from 21 countries, whose total population was 300 million.” Impressive indeed.

For many years, historian Ron Hotchkiss has been fascinated by “The Matchless Six,” the conquering heroines who took Amsterdam by storm. His extensive research has led to this riveting account, full of black-and-white archival photographs, of the events leading up to and following that fateful summer in the history of Canadian sport.

Praise For The Matchless Six: The Story of Canada's First Women's Olympic Team…

“Ron Hotchkiss makes readers know and care about the women, while vintage black-and-white photos vividly carry the visual aspect of the story.”
—Quill and Quire

"There's a splendid sense of adventure to The Matchless Six, an invigorating account of the first Canadian women to compete at the summer Olympic Games in Amsterdam in 1928... Author Ron Hotchkiss... presents a compelling, inspirational portrait of these young women and their athletic quest, from early training through six weeks overseas to their triumphant homecoming. He's done them proud."
—The Hamilton Spectator

"Hotchkiss does a very good job at contextualizing this particular Olympiad in terms of world events and Canadian cultural and social norms. Most of all, though, he provides a suspenseful account of the heartbreaks as well as the triumphs of the Matchless Six's Olympic experience, and vivid portraits of the individual women..."
—The Globe and Mail

Ron Hotchkiss is a retired high-school history teacher, with a passion for research, and a particular interest in 20th century Canadian history. His involvement with the “Matchless Six” began while researching an article on Ethel Catherwood for The Beaver: Canada’s History Magazine. That early research spawned many other articles and interviews, and two documentaries. Ron Hotchkiss has published numerous articles about Canadian History, and does regular presentations to school groups and historical associations. This is his first book.
Loading...
or
Not Currently Available for Direct Purchase