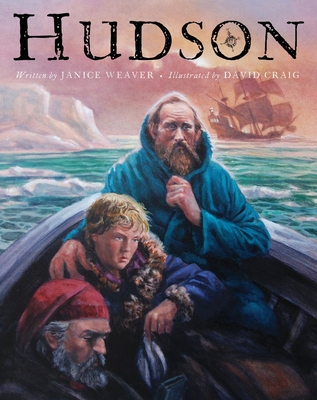 History has not been kind to Henry Hudson. He's been dismissed as a short-tempered man who played favorites with his crew and had an unstoppable ambition and tenacity. Although he gave his name to a mighty river, an important strait, and a huge bay, today he is remembered more for the mutiny that took his life. The grandson of a trader, Hudson sailed under both British and Dutch flags, looking for a northern route to China. Although none of his voyages led to the discovery of a northwest passage, he did explore what is now Hudson's Bay and what is now New York City.

Whatever his personal shortcomings, to sail through dangerous, ice-filled waters with only a small crew in a rickety old boat, he must have been someone of rare courage and vision. In Hudson, Janice Weaver has created a compelling portrait of a man who should be remembered not for his tragic end, but for the way he advanced our understanding of the world.

Praise For Mirror With A Memory:
". . . A great visual retrospective of a nation's people and events."
- School Library Journal

Praise For Building America:
"This is more than a marvelous illustrated history of architecture in America; it provides an easy-to-take social context for the buildings it showcases."
- Philadelphia Inquirer

Praise For From Head To Toe:
"[an] always engaging and often enthralling account of the place of clothes and assorted adornments through the ages. . . .Weaver is that exemplary explicator for whom one thing always leads to another. . . ."
- The Globe and Mail

JANICE WEAVER is a highly respected editor and the author of several acclaimed works of nonfiction for young people. Building America and From Head to Toe: Bound Feet, Bathing Suits, and Other Bizarre and Beautiful Things were each named Notable Books by the International Reading Association. From Head to Toe was also a finalist for both the Rocky Mountain Book Award and the Ontario Library Association's Red Maple Award. She is also the author of Mirror with a Memory: A Nation's Story in Photographs. Janice Weaver enjoys sailing near her home in Toronto, Ontario.

DAVID CRAIG is a distinguished artist whose work includes a series of paintings commemorating Canada's effort in the Second World War, posters, and fifteen coins for the Canadian Mint, including three gold Olympic coins. He was the first Canadian to receive the James Madison Book Award for First to Fly by Peter Busby. His picture books include Amelia Earhart: Legend of the Lost Aviator by Shelley Tanaka, which received the Orbis Pictus Award for Outstanding Nonfiction for Children.
Loading...
or
Not Currently Available for Direct Purchase