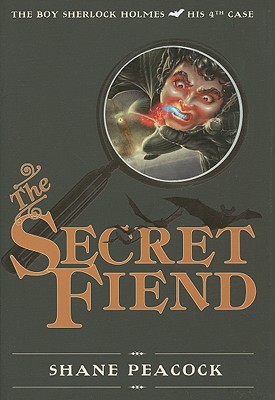 It is 1868, the week that Benjamin Disraeli becomes Prime Minister of the Empire. Sherlock's beautiful but poor admirer, Beatrice, the hatter's daughter, appears at the door late at night. She is terrified, claiming that she and her friend have just been attacked by the Spring Heeled Jack on Westminster Bridge and the fiend has made off with her friend. At first Sherlock thinks Beatrice simply wants his attention, and he is reluctant to go back to detective work. He also believes that the Jack everyone fears is a fictional figure. But soon he is suspicious of various individuals, several of them close friends.

Set at a time when many in England were in a state of fear because a Jew was running the country, Shane Peacock presents a compelling story filled with an atmosphere of paranoia and secrets and surprises played out on late-night London streets. Sherlock gets drawn deeper and deeper into the pursuit of the Spring Heeled Jack, whose attacks grow in number until it seems that there are Jacks everywhere.

The Secret Fiend is the fourth book in Shane Peacock's award-winning Boy Sherlock Holmes series, combining brilliant storytelling with fascinating historical detail and a mystery worthy of one of the greatest sleuths in English literature.

SHANE PEACOCK was born in Thunder Bay, Ontario, and grew up in Kapuskasing. A biographer, journalist, and screenwriter, he is also the author of several novels and plays. He has received many honors for his writing, including the Arthur Ellis Award for Eye of the Crow, the first of the Boy Sherlock Holmes series. Shane Peacock lives with his wife and three children near Cobourg, Ontario.

Praise For The Secret Fiend: The Boy Sherlock Holmes, His Fourth Case…

PRAISE FOR EYE OF THE CROW:
"The first intriguing volume in an ambitious new series ... plenty of readers will ... find themselves irresistibly drawn into his thrilling adventures."
— Booklist, Starred Review


PRAISE FOR DEATH IN THE AIR: THE BOY SHERLOCK HOLMES, HIS SECOND CASE:
"This is an exciting mystery, well written and fast paced...."
— School Library Journal

"This novel is written for the young adult, but adult readers will also find it satisfying.... The fast-paced adventure is a treat."
— The Globe and Mail
or
Not Currently Available for Direct Purchase
Copyright © 2020 American Booksellers Association