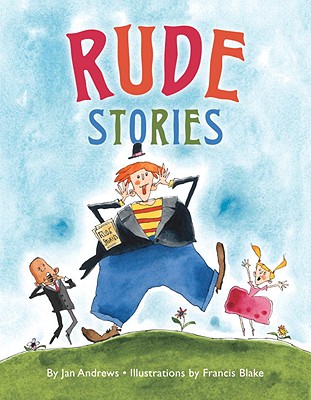 Meet Mr. Mosquito, drawn from a Gypsy story. He's cantankerous and nasty enough to raise belly laughs along with the eyebrows of the polite. In a story inspired by Australian bush tales, we meet Ella and Bella, two hilarious (and flatulent) sisters. Angelina's earthy wit is memorialized in a story from Swahili tradition.

The eight stories in Rude Stories have roots from Japan to Canada, from Africa to Eastern Europe, but they all share a sense of irreverence, and, because they are the work of a true storyteller, they beg to be read aloud, told aloud and shared. Francis Blake's hilarious askew art brings the characters to life in this spicy stew of international stories to satisfy every child's appetite for the deliciously absurd.

JAN ANDREWS was born in England and now lives at the end of a country road on a lake in eastern Ontario. She has a passion for the Canadian wilderness and for traditional folk and fairy tales. A past National Coordinator of Storytellers of Canada/Conteurs du Canada, she is also the co-founder of the eastern Ontario arts education organization MASC: Artists in Schools and Communities. Jan Andrews is the award-winning author of ten books for children and has received many honors, including the Governor General's Literary Award for Children's Text.

FRANCIS BLAKE has been an illustrator for as long as he can remember. His artwork has appeared in magazines, books, and advertising materials across North America, Europe, and Asia. He is the illustrator of Janice Weaver's From Head to Toe: Bound Feet, Bathing Suits, and Other Bizarre and Beautiful Things and The A to Z of Everyday Things as well as Jan Andrews' Stories at the Door.

Praise For Stories At The Door:
"Whimsical, colourful and full of mischief, the drawings are like a bag full of candy. And Andrew's stories are equally fun, offbeat and infused with a quirky wisdom .... When this books comes knocking at the door, let it in."
- Today's Parent