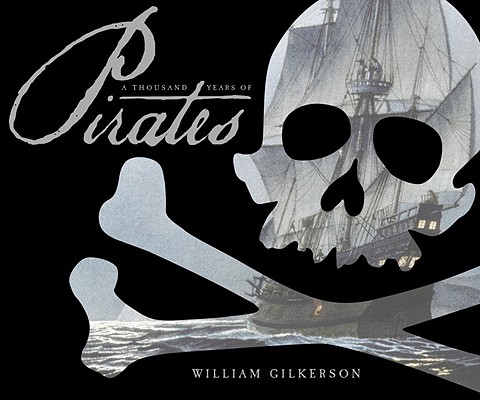 A Thousand Years of Pirates

For as long as they ve existed, pirates have conjured up visions of high-seas adventure and skullduggery, sea chases and bloody battles, dangerous coastal lairs and buried treasure. Rightly so, for ever since ships have carried valuable cargo, pirates have enraged monarchs and struck terror into the hearts of honest seamen with their willingness to risk life and limb for an undeserved share of the riches. Whether the cargo was gold or silver, spices or silks, animal or human, there have always been villains ruthless enough to kill or be hanged for it.
From the days of the Vikings to the present and in all the oceans of the world, pirates have made their presence known and feared. Recorded here are their stories along with striking images of ships, storms at sea, and secret harbors where black ships could be re-stocked and refitted.
Award-winning author and artist William Gilkerson has spent years researching and painting their colorful history. From the terrible Black Beard to the fascinating Granuaile, or Grace O Malley as the English called her, they have come to life under his brush. One can almost hear the creak of timbers, the snap of canvas while turning the pages. This gift book is a rich treasure in its own right.

William Gilkerson is a sailor, painter, journalist, and historian. He is the author of ten nonfiction books on nautical topics as well as works of satire, art commentary, and fiction. His two-volume treatise on the development of ship s weapons, Boarders Away, is a standard text. His drawings, watercolors, and oils have been featured in several major exhibitions and have been reproduced in books, magazines, and on film. William Gilkerson lives in Mahone Bay, Nova Scotia."
Loading...
or
Not Currently Available for Direct Purchase