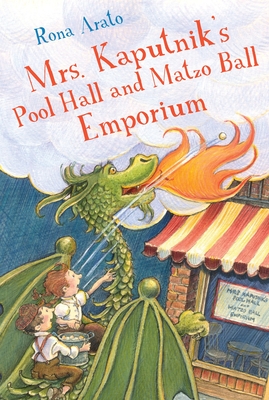 Treat yourself to a visit to the wackiest restaurant ever!

Ten-year-old Shoshi and her eight-year-old brother, Moshe, arrive in New York in 1898 from Russia with their mother and Snigger, the baby dragon that saved them from an attack by Cossack soldiers. Five years earlier, their father had also come to New York to make his fortune, but no one has heard from him since. Through a series of adventures and misadventures, Shoshi and Moshe use their wits to navigate through New York City's Lower East Side, making new friends and even a few foes: Salty, the seaman who helps the family smuggle Snigger through Ellis Island; Aloysius P. Thornswaddle, carnival barker extraordinaire; Dingle Hinglehoffer, pitcher for the Brooklyn Slobbers; and the mysterious Man in the Black Cape. With the help of Snigger, they set out to solve the mystery behind their father's disappearance, helping to free the Lower East Side from the tyrannical rule of gangster Nick the Stick along the way. Mrs. Kaputnik's Pool Hall and Matzo Ball Emporium is a colorful tale that blends history and fantasy with a journey of discovery, adventure, and fun.

RONA ARATO was born in New York and grew up in Los Angeles. Her work has appeared in magazines and newspapers in Canada and the United States. She taught elementary school in Los Angeles and Toronto, adult creative writing for the Toronto District School Board, and has conducted business writing workshops for profit and nonprofit organizations. From 1994-1998, she was an interviewer for Survivors of the Shoa, a Steven Spielberg project that recorded the histories of Holocaust survivors. Rona Arato lives in Toronto with her husband, Paul.
or
Not Currently Available for Direct Purchase
Copyright © 2020 American Booksellers Association