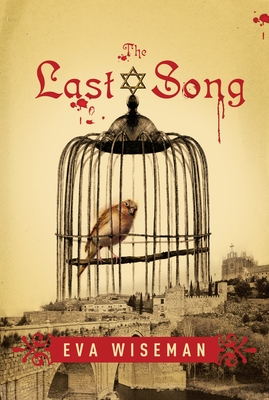 Spain had been one of the world’s most tolerant societies for eight hundred years, but that way of life was wiped out by the Inquisition. Isabel’s family feels safe from the terrors, torture, and burnings. After all, her father is a respected physician in the court of Ferdinand and Isabella. Isabel was raised as a Catholic and doesn’t know that her family’s Jewish roots may be a death sentence. When her father is arrested by Torquemada, the Grand Inquisitor, she makes a desperate plan to save his life – and her own.

Once again, master storyteller Eva Wiseman brings history to life in this riveting and tragic novel.

Praise For The Last Song…

“With spies and informers on all sides, the story builds to a gripping climax… readers will easily be caught by the young girl’s personal heartbreak and conflict and will want to find out more.”
—Booklist

“The Last Song, is sure to garner the same critical attention as her previous novels for its rhythmic and lyrical prose and lush descriptions of setting that cement the reader in the sights and sounds of Medieval Spain and the harsh brutalities of the Spanish Inquisition…. Isabel is a strong and insightful character whose voice will resonate with readers as she lingers long after one has finished reading.”
—Canadian Children’s Book News

“This historical fiction novel is set in Toledo, Spain in the 1490s, surrounded by the backdrop of the Spanish Inquisition…. The climax of the novel will set the reader in a spiraling whirlwind of intense emotions. This novel is a great read for young adults who enjoy historical fiction dealing with horrifying persecution and the will to survive.”
—VOYA

Hungarian-born novelist Eva Wiseman has received numerous prizes, including the McNally Robinson Books for Young People Award for My Canary Yellow Star. That novel and A Place Not Home were selected for the New York Public Library’s annual Best Books for the Teen Age list. Kanada was a finalist for the Governor General’s Literary Award and as the winner of the prestigious Geoffrey Bilson Award for Historical Fiction. Eva Wiseman is the mother of two and lives in Winnipeg with her husband.
Loading...
or
Not Currently Available for Direct Purchase