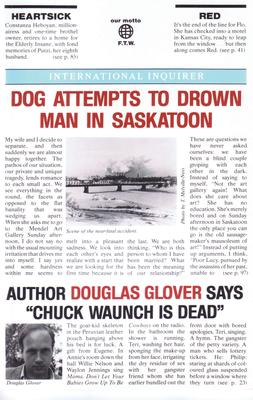 Douglas Glover is at his versatile best in this new collection of short stories. Urbane, stylish and slightly off-beat, the stories touch on the lives of a wide variety of human beings, whose only shared experience is the age in which they happen to meet: an abbot and a tramp sharing a seat on a Mexican train, a retarded farm boy and his incontinent dog, alienated singles in the American southwest, North Americans living--and dying--in an Indian ashram.

Praise For Dog Attempts to Drown Man in Saskatoon…

"Glover is preoccupied with the complicated interweavings of good and evil, and he juggles language superbly."
Globe and Mail

"Glover seeks to combine a metaphysical approach and style with the nitty-gritty details of daily life. It works."
Books in Canada

Douglas GloverBorn in 1948 on a tobacco farm in Ontario, writer and critic Douglas Glover is the author of many works of fiction including Dog Attempts to Drown Man in Saskatoon (1985). He currently lives and teaches in upper New York State.
Loading...
or
Not Currently Available for Direct Purchase