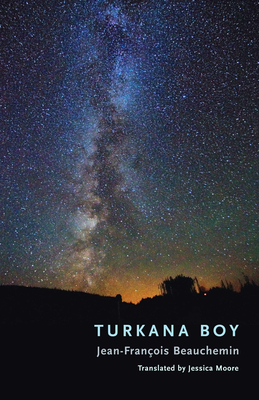 In this contemplative novel-poem, Jean-Fran ois Beauchemin invites us to share in the inner world of the grieving Mr. Bartolom , who, following the mysterious disappearance of his young son, wanders and wonders, seeking to transcend his pain by encountering something larger than himself. Continuously occupied by the memory of his lost son, Bartolom 's quest leads him from the city to the countryside and then to the edge of the ocean, where he marvels at the beauty of nature but cannot penetrate its mysteries. Through reference to the two-million-year-old "Turkana Boy," the fossilized remains of a boy found in 1984 near Lake Turkana, Kenya, Beauchemin addresses processes of memory and the long history of human evolution. Beauchemin's character Bartolom sees in the lives of the boys--separated by nearly two million years--a kind of twin destiny. Has the passage of millennia changed the intensity of human feeling at the loss of blood relations? "Who knows what they had felt? Had the same emotions, those associated with incommensurable loss, broken their bodies, as they had his? Over and above morphological differences sculpted by the passage of millennia, was there something resembling a permanence of feeling, a sort of eternity for the murmuring of the heart, transmitted through the ages by the bonds of blood?" Turkana Boy offers a poignant examination of grieving and one man's search for understanding. This surrealist narrative is punctuated with magnificent musings on the world and startling questions about what it means to be alive.