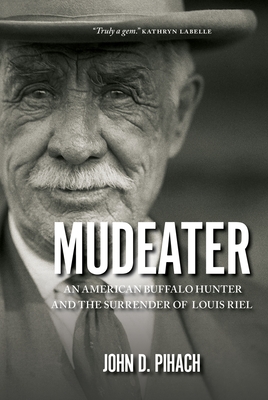 An American Buffalo Hunter and the Surrender of Louis Riel

-- Keith Carlson, author of The Power of Place, The Problem of Time

Born the son of a Wyandot Chief in Kansas in 1849, Irwin Mudeater was one of the last great frontiersmen of the old American West.

Hired to run wagon trains heading to Santa Fe, he fought off "Indian attacks," was caught up in the Civil War, drove a stagecoach, and lived the life of a plainsman on the lawless frontier. Most of all, he was a buffalo hunter--killing as many as 126 in one day.

In 1882, Mudeater moved to Canada, adopted the name Robert Armstrong, and portrayed himself as white. He came into the service of General Middleton, and, shortly after the fall of Batoche, played the lead role in bringing the fugitive M tis leader, Louis Riel, into custody.

Mudeater attempts to resolve the opposing stories of Riel's surrender or capture, scrutinizes the sensational incidents in Armstrong/Mudeater's life, and, with the inclusion of his unpublished memoir, allows this consummate story teller to speak in his own voice.