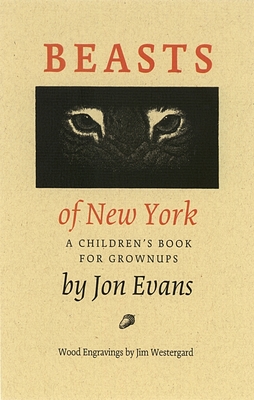 A Children's Book for Grownups

Patch knows something is direly wrong when all the squirrels in Central Park wake to find every foodstore stolen -- and, in the middle of winter, that means starvation. Patch's mother is gone without a trace and in her den drifts a musky, unfamiliar scent. Hungry, tired and alone, Patch sets off into the mountains, ' the human lands of New York City, to find food and to uncover what's happening to his family.

He finds out too late that a war is brewing beneath his paws.

Patch is swept into an deadly battle that unites squirrels, birds, cats and dogs against vicious forces below the ground, rumoured to be led by the mysterious, legendary King Beneath. Gripping and suspenseful, Beasts of New York is a gritty urban fantasy populated by unforgettable characters as vivid and complicated as humans: from mercurial Zelina, the Queen of All Cats, to Snout, a massive and power-hungry rat, to Karmerruk, an arrogant, dangerous hawk.

Evans's New York City of wildlife is deeply imagined; the urban landscape wavers between the familiar and the disturbingly bizarre, while Jim Westergard's intricate wood engravings illuminate the settings and many characters. Evans, a master of dark crime thrillers, brings his fast-paced energy to an entirely new world -- one right under our feet.