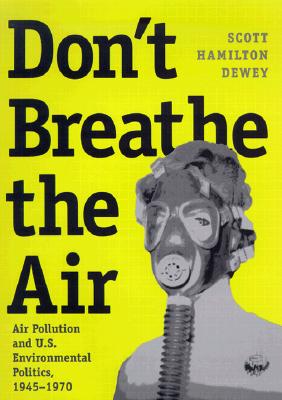 With the menace of smog hanging over an increasing number of American cities in the 1960s, “Clean Air!” became a rallying cry for a new environmentalism. Citizen activists rallied passionately to force state and local governments to address problems that threatened human health and even survival. In Don’t Breathe the Air, Scott H. Dewey traces the history of air pollution control efforts, focusing on the decade of the sixties, and describes how local efforts helped create both the modern environmental movement and federal environmental policy.

Early in the fight against air pollution, activists recognized the need for intergovernmental solutions. Because air was mobile, no single jurisdiction could address problems alone. Dewey has chosen three case studies involving different sources of air pollution and different configurations of governments to discover how jurisdictional issues affected environmental organization and the ability to clean up the air.

First, Dewey looks at Los Angeles, arguably the birthplace of modern air pollution. Because much of the city’s air pollution was automobile-related, Los Angeles had to enlist help from the State of California to regulate both the industry and car owners. Relatively speaking, Los Angeles was a success story, one that set important precedents and illustrated a pattern of local concerns entailing action in a larger arena.

Dewey then turns to New York City, a city plagued by air pollution problems that involved more than one state and required regional action. In its comparative lack of success in dealing with its atmospheric woes, compounded by the pollution descending on it from neighboring New Jersey, New York was more typical of the overall national pattern than was Los Angeles.

Finally, Dewey examines central Florida, where a rural, agricultural area suffered from severe industrial air pollution that required a multi-jurisdictional solution and a confrontation with influential phosphate manufacturers that all levels of government were long reluctant to tackle.

Don’t Breathe the Air is a comprehensive look at the role of air pollution and citizen activism during the rise of environmentalism in the post–World War II United States. It clearly lays out the issues and strategies that prepared the way for the federal clean air legislation of the 1970s.

Scott H. Dewey, who received his doctorate from Rice University, is an adjunct professor at California State University–Los Angeles. He has published several articles on environmentalism, focusing on the role of various organized groups in the movement for clean air.
Loading...
or
Not Currently Available for Direct Purchase