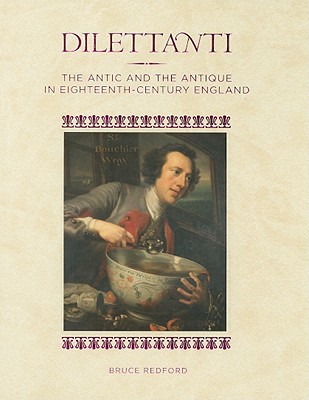 The Antic and the Antique in Eighteenth-Century England

With elegance and wit, Bruce Redford re-creates the vibrant culture of connoisseurship in Enlightenment England by investigating the multifaceted activities and achievements of the Society of Dilettanti. He dissects the British connoisseurs whose expeditions, collections, and publications laid the groundwork for the Neoclassical revival and for the scholarly study of Graeco-Roman antiquity.

After the foundation of the society in 1732, portraits of the Dilettanti were painted by George Knapton, Sir Joshua Reynolds, and Sir Thomas Lawrence. These include a striking group of mock-classical and mock-religious portraits, which Redford deconstructs deliciously.

The society’s support of expeditions to the Levant yielded pioneering architectural and archaeological folios, from The Antiquities of Athens (1762) to Specimens of Ancient Sculpture (1809). These monumental volumes aspired to empirical exactitude in text and image alike. As Redford shows, they combine the didactic (detailed investigations into technique, condition, restoration, and provenance) with the connoisseurial (plates that bring the illustration of ancient sculpture to new artistic heights).


Praise For Dilettanti: The Antic and the Antique in Eighteenth-Century England…

“Bruce Redford’s Dilettanti is not itself a dilettantish work, for the book’s succinctness and lightness of touch reflect skill of the highest order. . . . There is nothing remote or dusty about either the Dilettanti or his book.”—New York Review of Books

“Redford’s exemplary study provides a richly layered account of the Dilettanti and the quintessentially eighteenth-century culture of curiosity they embodied.”—New Perspectives on the Eighteenth Century

"This is a crucial work for students and scholars interested in 18th-century studies.  Highly recommended."—Choice

“In writing Dilettanti, Redford has presented a compelling and invigorating overview of the Dilettanti, their society, and the impact that this group of eccentric amateur scholars has had on history.”—History in Review

Bruce Redford is University Professor and Professor of Art History and of English at Boston University.