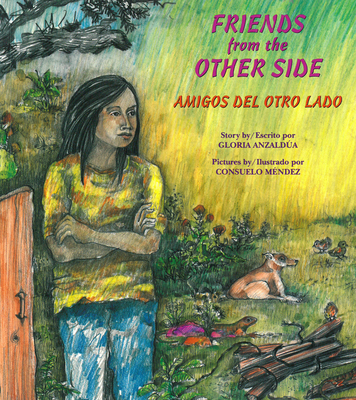 Friends from the Other Side / Amigos del Otro Lado

Having crossed the Rio Grande into Texas with his mother in search of a new life, Joaqu n receives help and friendship from Prietita a brave young Mexican American girl.

Did you come from the other side? You know, from Mexico? So begins the friendship between Prietita and Joaqu n, the young boy who, with his mother, has crossed the Rio Grande River to Texas in search of a new life.

Prietita, a brave young Mexican American girl, defends Joaqu n from the neighborhood kids who taunt him with shouts of mojado or wetback. But what can she do to protect Joaqu n and his mother from the Border Patrol as the van cruises slowly up the street toward their hiding place?

Writer Gloria Anzald a is a major Mexican American literary voice. Illustrator Consuelo M ndez is a noted Latin American artist. Both grew up in South Texas. In this, their first collaboration, they have captured not only the hardship of daily life on the border, but also the beauty of the landscape and the dignity and generosity of spirit that the Mexican Americans and the Mexican immigrants share.