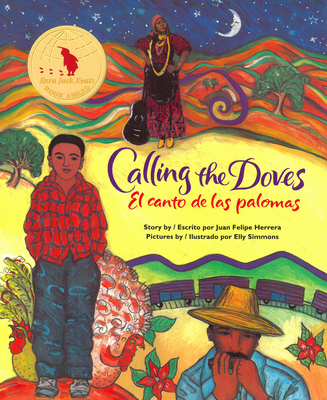 Calling the Doves is poet Juan Felipe Herrera's story of his migrant farmworker childhood. In delightful and lyrical language, he recreates the joy of eating breakfast under the open sky, listening to Mexican songs in the little trailer house his father built, and celebrating with other families at a fiesta in the mountains. He remembers his mother's songs and poetry, and his father's stories and his calling the doves. For Juan Felipe, the farmworker road was also the beginning of his personal road to becoming a writer.

Juan Herrera is an acclaimed poet and children's book author. His first children's book, Calling the Doves, won the prestigious Ezra Jack Keats Award, and another book, The Upside Down Boy, was made into a musical for young audiences in 2004. He teaches at California State University, Fresno. Elly Simmons is an internationally-exhibited painter. Her first picture book for Children's Book Press, Magic Dogs of the Volcanoes by Manlio Argueto, was highly praised for its rich colors and magnificent imagery. She lives with her family in Lagunitas, California.
Loading...
or support indie stores by buying on