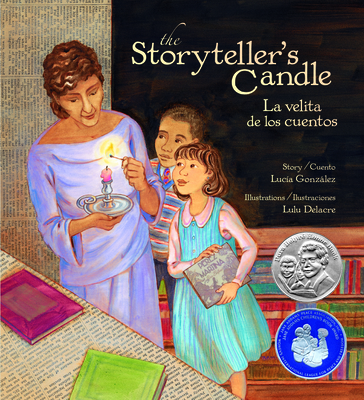 The winter of 1929 feels especially cold to cousins Hildamar and Santiago--they arrived in New York City from sunny Puerto Rico only months before. Their island home feels very far away indeed, especially with Three Kings' Day rapidly approaching. But then a magical thing happened. A visitor appears in their class, a gifted storyteller and librarian by the name of Pura Belpr . She opens the children's eyes to the public library and its potential to be the living, breathing heart of the community. The library, after all, belongs to everyone--whether you speak Spanish, English, or both.

The award-winning team of Luc a Gonz lez and Lulu Delacre have crafted an homage to Pura Belpr , New York City's first Latina librarian. Through her vision and dedication, the warmth of Puerto Rico came to the island of Manhattan in a most unexpected way.

"This is a warm, winning introduction to the work of the first Puerto Rican librarian in New York, whose name was given to the American Librarian Association's annual award that honors Latino authors and illustrators." - Booklist


"Sepia tones evoke the time period and the setting. A lovely offering about the role of librarians in the lives of children." - School Library Journal


"[T]his warmhearted Spanish/English bilingual story adopts the perspective of two children who are inspired by Belpré to enter a library for the very first time. . . ." - Publishers Weekly