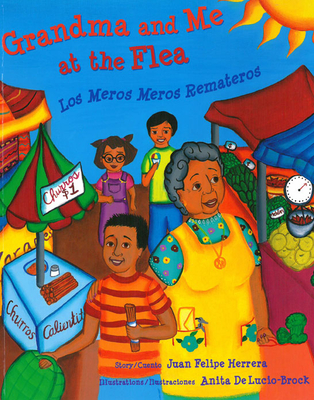 Grandma and Me at the Flea

Bilingual English/Spanish. Every Sunday, Juanito helps his grandmother sell old clothes beneath the rainbow-colored tents at the remate, the flew market.

Every Sunday Juanito helps his grandmother sell old clothes beneth the rainbow-colored tents at the remate, the flea market. There, Juanito and his friends romp from booth to booth, fulfilling Grandma's vision of the remate as a sharing community of friendly give-and-take.

Juanito gallops to the jewelry-man, who gives Juanito a copper bracelet and a watch for Grandma in exchange for her help sending money orders home to Mexico. Se ora Vela gratefully accepts a bundle of Grandma's healing herbs in return for sacks of ruby red chiles. With every exchange Juanito learns firsthand what it means to be a true rematero - a fleamarketeer - and understands that the value of community can never be measured in dollars.