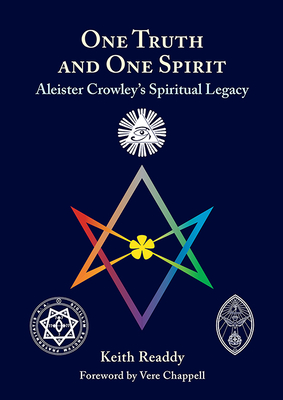 One Truth and One Spirit

Based upon academic research at the University of Amsterdam's Center for the History of Hermetic Philosophy and Related Currents, One Truth and One Spirit is a much-needed work that covers a previously unexplored history of the modern religious movement known as Thelema. This work details the theoretical framework of Aleister Crowley's spiritual legacy in the O.T.O. and the A?A? and covers the years of Thelema since Crowley's death in 1947.

One Truth and One Spirit approaches a complex topic with a complex history, with exhaustive citations and sources, but it is written for anyone interested in the subject of Thelema. The author utilizes published source material as well as previously unavailable information, which makes this a unique contribution to the available literature.

One Truth and One Spirit is expected to be of interest to the novice, the scholar, and the seasoned practitioner of Thelema. The work provides a general historical overview of Thelema from a theoretical vantage point, explores the historical development of the movement from the 1960s to the 1990s, and applies the author's own critical discussions on the topic itself.


Praise For One Truth and One Spirit: Aleister Crowley’s Spiritual Legacy…

“I have often maintained that for Thelema to be taken seriously, we need to develop a culture of rational discourse. The possibility of such discourse depends on Thelemites using scholarly methods to develop how we approach our history, doctrine, and practices as Thelemites. In other words, it turns Thelema into a contributing subject, rather than being merely an object of study. Keith Readdy has accomplished something very special with this book. It covers the doctrines, organizations, and the often-problematic history that is associated with the Law of Thelema. I fully believe that in the future, this book will be regarded as one of the pillars that made rational discourse possible within our community.” --Kjetil Fjell, Psy. D., Specialist in Neuropsychology
— Kjetil Fjell, Psy. D.

“By properly approaching Thelema as a New Religious Movement, Keith Readdy, in his study One Truth and One Spirit, sets the stage for a clear-sighted engagement with Aleister Crowley’s spiritual legacy. While Crowley himself has been the subject of more than a dozen biographies, the doctrinal aspects of the system, of which he considered himself the Prophet, received much less hermeneutical treatment. The author, trained in the academic study of Western Esotericism, provides a solid theoretical overview of Thelema and traces the historical development of the system from its inception up to the present moment. It is in particular this latter aspect of the book, where the author attempts to distinguish between history and mnemohistory between facts and narratives, that is going to be controversial and challenging to some readers. The issue concerns legitimacy and authority among various factions within the Thelemic movement, and the author offers an erudite and convincing exposition of his views on the matter. The book will be of great interest not only to the adherents of Thelema, irrespective of their personal allegiances and persuasions, but to all interested in the history of Western Esotericism and New Religious Movements.” --Gordan Djurdjevic, Ph.D., author of India and the Occult
— Gordon Djurdjevic, Ph.D.

“Keith Readdy has alchemically united his passion for Aleister Crowley’s A.’.A.’. and O.T.O. with his academic training in Western esotericism. He tackles the thorny question of whether Thelema is a religion, a spirituality or a philosophy. He summarizes the evolution of Thelemic doctrine in the teachings of both Crowley and modern-day exponents like J. Daniel Gunther and Fratres Shiva and Phanes. He recounts the convoluted history of Thelema since Crowley’s death—no easy feat! And he analyzes the role of publishing as *the* vehicle for preserving and promulgating the message of Aleister Crowley as the prophet of Thelema. It’s rare for a book to offer something for everyone, but One Truth and One Spirit packs in so many thought-provoking details that anyone with an interest in Aleister Crowley or Thelema will encounter valuable insights throughout its pages.” —Richard Kaczynski, author of Perdurabo: The Life of Aleister Crowley and Forgotten Templars: The Untold History of Ordo Templi Orientis
— Richard Kaczynski

“An essential account of the history of the O.T.O. in modern America. A compelling and well-researched book that rewards repeated reference.” —Paul Feazey, webmaster of LAShTAL.com
— Paul Feazey

“Everyone interested in Crowley’s institutional and philosophical legacy—and especially members of Thelemic bodies—will benefit from reading Keith Readdy’s extensive study. Its strengths lie in clarifying Thelema’s growth as a religious movement, in expressing its peculiarities as religion, philosophy, and magical order, and in adumbrating Thelemic ethics, along with the tangled history of the A...A... and O.T.O.

Readdy traces the development of Thelema as a system after its initial prophetic impulse in 1904, making helpful distinctions between “religion” and “spirituality.” Above all, he delineates the fate of Crowley’s two principal orders after his death in 1947 in the context of a discourse on “duplexity.”

Thelema’s reliance on its publishing history is clearly presented, as is the long battle for possession, or re-possession, of Crowley’s institutional legacy—principally his copyrights—waged between Karl Germer’s protégé Marcelo Ramos Motta and Crowley’s intended successor to Germer, Grady McMurtry. Tensions and hostility between Jane Wolfe’s former “pupil” Phyllis Seckler (representing A...A... interests), and husband McMurtry (representing O.T.O. interests), receive detailed treatment, building on James Wasserman’s autobiographical account Into the Center of the Fire(2012). The issue of A...A... “lineages” is a primary interest of the book’s latter part.

Readdy illuminates the disconcerting reality of schism in the O.T.O. and continuing vexation in the A...A... system over adherence to Crowley’s original intentions. Readdy’s concise, lucid treatment of the O.T.O.’s internalized Ecclesia Gnostica Catholica is a boon to understanding the complex Thelemic synthesis as manifested in practice.

Above all, while the author writes as an infra-movement adherent and specialist—accepting Crowley’s privileged spiritual authority—he issues a summons for a rational case for the extension of academic interest in Thelema from the burgeoning chapel of Western Esotericism, so to engage with mainstream philosophy, sociology, psychology, political science, behavioral and cognitive sciences, even environmental studies.

Thelema has apparently reached a new stage in its 114-year development, and Readdy’s book is both symptomatic of this, and arguably vital to its continuance. The time-factor is interesting. Most lasting religious movements go through a century or so of inward, incubatory drama before emerging on the greater stage of life. Readdy presents Thelema as a system ready to take its full place in the world.” --Tobias Churton, author of Aleister Crowley: The Biography and Aleister Crowley in America

Keith Readdy is an independent researcher of religion and philosophy. He holds a bachelor's degree in philosophy from the University of Central Florida and a master's degree in the history of religion from the University of Amsterdam. He has been a member of the Ordo Templi Orientis and an aspirant to the A?A? since 2010. He currently resides in the United Kingdom with his wife Kyra.

Vere Chappell is a writer, photographer, and researcher specializing in spirituality and sexuality. He has a bachelor's degree in Cognitive Science, a Master of Business Administration, and a doctoral degree in Human Sexuality. He has traveled throughout the United States, Europe, Asia, and the Middle East, including research trips to Greece, Turkey, Israel, Egypt, Thailand, and Nepal. He has lectured extensively on sexuality and the occult, and written numerous papers and articles on the subject. Author website: www.erotology.net