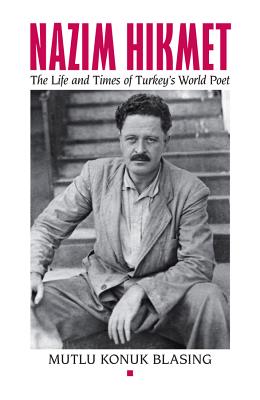 The Life and Times of Turkey's World Poet

An authoritative biography of Turkey's most important and most popular poet.

Nâzim Hikmet (1902–1963), Turkey’s best-loved poet and a commanding presence in its public life, lived through a turbulent era—the end of the Ottoman Empire, the rise of Communist Russia, and the birth of the Turkish Republic. Born into the Ottoman elite, Hikmet embraced Communist ideals and joined the revolutionary ranks at nineteen. Of passionate temperament, he lived his life full-tilt, deeply romantic in his loves and uncompromising in his politics—for which he spent more than a third of his life in prisons or in exile. His stirring free verse in simple words, praising his country, his women, and the common man, was considered “subversive” and banned for decades. Today it is available in more than fifty languages, and Hikmet is recognized worldwide as a major twentieth-century poet.


Praise For Nâzim Hikmet: The Life and Times of Turkey's World Poet…

(Hikmet) looms as a huge presence in Turkish public life. . . . a valuable biography of a vital twentieth-century figure.
— The Times Literary Supplement

[Hikmet] shared with poetic modernists worldwide the determination to be understood by the common person. …In enlightening remarks on his work as much as the limning of his life, Blasing shows a great poet becoming a great hero.
— Ray Olson - Booklist – Starred review

[Hikmet] was one of the greatest writers of the last century . . . . It is time for the English-speaking world to discover this fantastic writer, and Konuk Blasing’s new biography is a major step in this direction.
— Zack Rogow - Words Without Borders

...an enticing exploration . . . a core addition to any international biography collection focusing on thinkers and poets, highly recommended.
— The Midwest Book Review

This biography tells the dynamic story of Turkey’s most acclaimed twentieth-century poet. His artistic growth is outlined along with his patriotism, his leftism, and his long-term rejection by the country he loved. Blasing is a prolific translator of Hikmet’s work, and she incorporates elements of literary scholarship into her investigation of his life.
— World Literature Today

Mutlu Konuk Blasing, a native of Istanbul, is Professor of English at Brown University. Her books include Lyric Poetry: The Pain and the Pleasure of Words. She is the co-translator (with Randy Blasing) of the renowned English translations of Nazim Hikmet, and the author of four scholarly books on American poetry.
Loading...
or
Not Currently Available for Direct Purchase