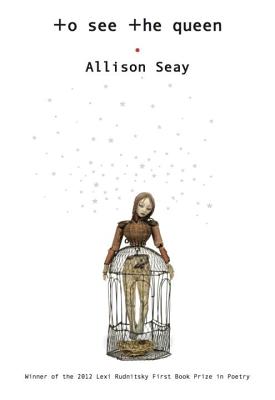 To See The Queen

A startling collection from the winner of the 2012 Lexi Rudnitsky First Book Prize in Poetry.

In this “hauntingly spectacular debut” (Claudia Emerson, winner of the Pulitzer Prize), Allison Seay portrays a world fraught with the powers of its own harrowing imagination—an inner world of seemingly irreversible retreat and, almost impossibly, of spiritual resurgence. To See the Queen describes the terrain of one woman’s psychological wilderness, only to bless us with the story of its population, growth, and ultimate transcendence.


Praise For To See The Queen: Poems…

Plath, Pessoa, Wolfe, Styron, Sexton, Anne Carson, Donald Justice, Jack Gilbert. To See The Queen joins the melancholy beauties of our time, nestles among them, fights to dig out of it all.

Allison Seay’s poems have appeared in Harvard Review, Poetry, and many other publications. She lives in Richmond, Virginia.
Loading...
or
Not Currently Available for Direct Purchase