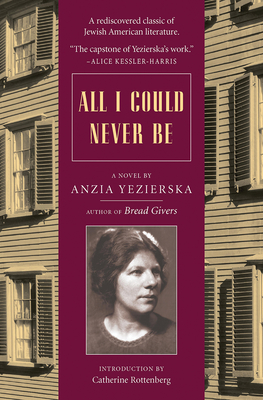 All I Could Never Be

Rediscovered: a Jewish American classic. A young Polish Jew transforms herself from shirt factory worker on the Lower East Side to successful author living in a quiet New England village. An insightful, deeply felt novel presaging the assimilation of Jews into American life.

Fanya, a young Polish Jew, living and working on the Lower East Side, attends a lecture by a famous educator, Henry Scott, that seems meant specifically for her.  Scott calls America “the meeting ground of all the nations of the world” and exhorts Americans to “blaze a trail to a future where people would be judged not by membership in a group  . . . but as individuals on their own merits.”   On an impulse, Fanya goes to Scott’s university office and boldly asks him to read the autobiography she has written. After a highly charged exchange, the rational, older, American professor is won over by the young, passionate, Jewish immigrant. She is his fascination; he is her “symbol of all she could never be.” Scott becomes her mentor, leading Fanya to success as an author.  He also expresses romantic interest in her, but ultimately rebuffs her socially. Although she is crushed, instead of returning to the ghetto to live among “her own people,” as so many before her have done, Fanya chooses to advance further into America. She buys a house in a quiet New England village, where, eventually, another newcomer becomes an unexpected soul mate—and she prepares to make a home.

This moving portrait of a vibrant and talented immigrant woman is based on the author’s true relationship with John Dewey, the important and famous educator who was her most significant influence. It depicts the workings of American society during the 1930s, especially between the privileged class and immigrants who were striving for a better life. It is an early and optimistic story of Jewish assimilation, and grapples with issues still faced by immigrants today.

The comprehensive introduction by Dr. Catherine Rottenberg, who rescued the novel from obscurity, describes the novel’s significance, placing it in the context of Yezierska’s work and life, as well as within the Jewish American literary tradition.

Anzia Yezierska was born in Poland and emigrated with her family to the Jewish Lower East Side of New York City in 1890 when she was nine years old.  By the 1920s she had risen out of poverty and become a successful writer of stories, novels—all autobiographical—and a semi-fictional autobiography, Red Ribbon on a White Horse (Persea). Her novel Bread Givers (Persea) is considered a classic of Jewish American fiction and has sold many hundreds of thousands of copies since its reissue in 1975.  Persea also publishes How I Found America: Collected Stories and The Open Cage: An Anzia Yezierska Collection (a selection of stories, excerpts from Red Ribbon on a White Horse, and uncollected stories on old age).   Yezierska died in 1970.

Dr. Catherine Rottenberg currently teaches American literature and gender studies in the Department of American and Canadian Studies at the University of Notthingham, England.  She was born and grew up in New York City, earned her B.A. in Jewish Studies at Brown University and both her M.A. and Ph.D. in English Literature at the Hebrew University of Jerusalem. She has also been a fellow and/or visiting scholar at the University of California (Berkeley), the University of Michigan (Ann Arbor), and at the Institute for Advanced Studies, Princeton University.  She lives in England.
Loading...
or support indie stores by buying on