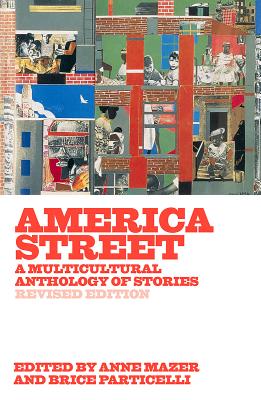 A Multicultural Anthology of Stories

Published in 1993, America Street was the very first collection of stories about young people growing up in our diverse society. It has informed and inspired hundreds of thousands of readers. Now this influential and much-loved anthology is expanded and updated for a new generation. Twenty stories, twelve new and eight returning favorites, focus on life issues, from the personal to the political.

Praise For America Street: A Multicultural Anthology of Stories…

A collection of short stories that brilliantly capture
defining moments in the lives of a diverse group of American children
and teens.... a series of snapshots of the lives of youth growing up in the United States.... The protagonists are as diverse as the authors... resulting in nuanced narratives that feel honest and relevant.... A lyrical, poignant collection of voices that reflect the racial and ethnic diversity of modern America.
— Kirkus Reviews (Starred Review)

Anne Mazer is the author of several widely acclaimed books, including the novels Moose Street and The Oxboy, and a picture book, The Salamander Room, winner of the Keystone to Reading Book Award and a Reading Rainbow Feature Selection. Anthologies from edited by Mazer include: America Street, Going Where I'm Coming From, A Walk in My World, and Working Days. Mazer grew up in Syracuse, NY and lives in Ithaca, NY.

Brice Particelli earned
his Ph.D. in English Education from Columbia University. He has been an
instructor and a consultant in middle schools and high schools in
Chicago and New York, and the Director of the Student Press Initiative at Teachers College Columbia University. In addition, he has run teacher education workshops internationally.  Particelli publishes regularly in both research journals and literary journals, and was recently awarded fellowships from the New York Foundation for the Arts and the Wilson Center. He teaches writing at Pace University.