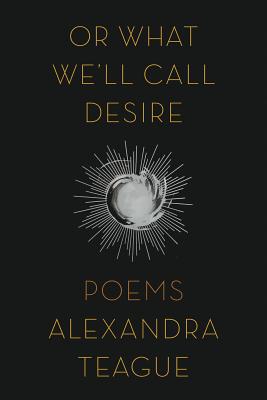 Or What We'll Call Desire

New poems that showcase high-art and popular culture, vamps and giant artichoke statues, and Freudian Disney dolls in a poignant exploration of cultural and personal legacies.

This heartrending and darkly playful new collection by Alexandra Teague tries to understand the edges of self in a patriarchal culture and in relation to a family history of mental illness and loss. In poems that mix high art and popular culture (from classical Greek statues to giant plaster artichokes, Cubism to Freudian Disney dolls), Teague interweaves self-reflection with the stories and lives of mythic and historic female figures, such as the dangerous-wise witch Baba Yaga and early-20th-century sculptors’ model Audrey Munson--calling across time and place to explore desire, grief, and the representation and misrepresentation of the female form.


Praise For Or What We'll Call Desire: Poems…

Teague’s poems, so often
first anchored in singular moments, evolve into mazes of time and space...
— The Millions

Alexandra Teague is the author of two previous books of poetry—Mortal Geography, winner of Persea’s 2009 Lexi Rudnitsky Prize and the 2010 California Book Award, and The Wise and Foolish Builders—and the novel The Principles Behind Flotation. She is also co-editor of Bullets into Bells: Poets and Citizens Respond to Gun Violence. A former Stegner Fellow and National Endowment for the Arts Fellow, Alexandra is a professor at University of Idaho.
Loading...
or
Not Currently Available for Direct Purchase