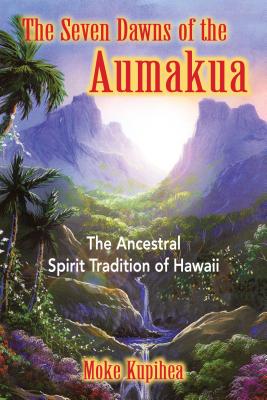 The Seven Dawns of the Aumakua

The Ancestral Spirit Tradition of Hawaii

In The Seven Dawns of the Aumakua Moke Kupihea takes the reader on his journey from childhood to young manhood as he experiences what remains of the spirit of his ancestors and learns the importance of remembering. The descent of the aumakua and its spiritual link through the eyes, sound, voice, touch, people, and breath constitute its seven dawns--the means by which the author is reawakened to his native tradition.

The author’s desire to know this tradition leads him as a young boy to seek out his kupuna--his elders, the old men of the mountains--and learn from them the stories to be found in each feature of the landscape. These men and the people he meets as he grows older became his kahu--his ancestral guardians--who teach him to understand that the world of ancestral voices still speaks, if only in a whisper. Learning how to hear these voices is the key for returning Hawaii to its proud spiritual path and learning to live mindfully and soulfully with the land and with all who have come before us.

Praise For The Seven Dawns of the Aumakua: The Ancestral Spirit Tradition of Hawaii…

“Kupihea writes eloquently about the destruction of Hawaiian spiritual values by the invasion of a new culture . . . and the key to returning to a spiritual balance with humankind and nature.”
— Library Journal

"Moke Kupihea has the strength of conviction necessary to impart to the world a more sensitive account of Hawaiian kahuna heritage, which comes down to him from the priesthood line from which he descends."
— Rubellite Kawena Johnson, Professor Emeritus of Hawaiian Language and Literature, University of Hawa

"A unique insight into Hawaiian philosophy. Kupihea's spiritual journey is both exciting and rewarding. Throughout this odyssey he makes clear not only a deep understanding of Hawaiian spiritual beliefs but also his aloha for the traditions of his ancestors and his determination that these traditions shall not die. He has provided us a distinctive voice that speaks not only to Hawaiians but to all peoples whose traditional beliefs are threatened."
— Andrew Bushnell, Professor of History, Kauai Community College

"Highly recommended for all libraries."
— Glenn Masuchika, Library Journal, May 15,2001

"This is one of the best reference books on Hawaiian culture and traditions that I have ever seen. In my opinion, it very accurately reflects the spirituality of this most beautiful culture."
— Bonnie Cehovet, Angelfire, Sept 2005

Moke Kupihea is also author of The Seven Dawns of the Aumakua. He has lived his entire life in Kauai's sacred Waimea Valley.
Loading...
or
Not Currently Available for Direct Purchase