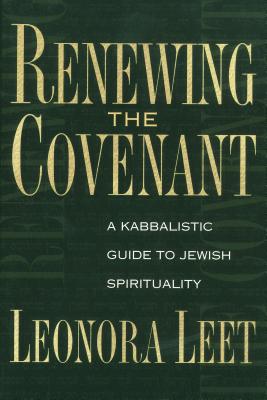 A Kabbalistic Guide to Jewish Spirituality

A guide to how meditations and principles from the Kabbalah can be used to profoundly renew spiritual practice.
- Reveals transformational meditations and visualization exercises based on the profoundest truths concealed in the Kabbalah.
The covenant that bound God to the Patriarchs in a special relationship of obligation and empowerment was renewed by God with Israel at Sinai and Moab. Each of these three Jewish covenants can be associated with a particular spiritual practice: the Patriarchal Covenant with Father Isaac's practice of meditation; The Sinai Covenant of Holiness with the observance of the Sabbath required in its Ten Commandments, and the Moab Covenant of Love, comprising the entire Mosaic Torah, with the practice of prayer instituted there. In Renewing the Covenant, Leonora Leet shows how this ladder of increasingly demanding and potent covenantal practices can enable one to ascend to ever higher levels of mystical Judaism.
At this threshold of a new millennium, increasing numbers of people are seeking a more direct connection with the Divine. To aid such a process, Renewing the Covenant provides new paths for entering the treasurehouse of Jewish spirituality and achieving higher consciousness, paths that can deepen the devotions of both nonobservant and traditionally observant Jews. This process of covenant renewal begins with effective kabbalistic techniques of meditation combining mantra with visualization, proceeds through the return to a reconstructed Sinai Sabbath, and arrives at the culminating practice of ritual prayer whose performance can fulfill the kabbalistic purpose of creation. When undertaken in the steps laid out by Dr. Leet, this process can help many to discover forms of spiritual practice precisely tailored for the modern world, as well as a new appreciation for the rich spiritual heritage of Judaism.

Leonora Leet (1929-2004) received her Ph.D. from Yale University and was Professor of English at St. John's University. She is the author of The Universal Kabbalah, The Kabbalah of the Soul, Renewing the Covenant, and The Secret Doctrine of the Kabbalah.

Praise For Renewing the Covenant: A Kabbalistic Guide to Jewish Spirituality…

"A fascinating reinvention of the venerable tradition of the Kabbalah. Mystical adepts and beginners alike should enjoy Leet's advice about the meaning and strength of prayer and her renewed vision of Kabbalistic cosmology."
— Library Journal

"This is not another pop Kabbalah book. Dr. Leet has written for serious readers and aspirants who want to delve much deeper than the surface and work on their transformation. Her original approach is grounded in her own authentic discoveries in an ancient tradition."
— Rabbi Zalman Schachter-Shalomi

"Renewing the Covenant addresses some of the more thorny and complicated issues in Jewish law and Jewish texts, and relates these to issues that are of concern to people in the contemporary world who seek a spiritual path."
— Michael Lerner, Editor, Tikkun

"The first in a four-book project, Renewing the Covenant delivers on its promise of a new approach to Jewish ritual practice in tune with the spiritual attitudes of the 21st century. Leet synthesizes historical, textual, and linguistic analysis with kabbalistic meditation and Judaic tradition in this scholarly address of Jewish spiritual advancement. Focusing on the covenant between God and Israel as set forth in the Bible, Leet distills the essence of the most basic Jewish customs--Sabbath observance and ritual prayer--and recovers early Jewish meditative practices, which she then melds with kabbalistic meditative techniques. One might think that Renewing the Covenant decrees revolutionary change, but in reality it offers an accessible return path to the very foundations of sacred Jewish traditions and a revitalization of Jewish spirituality."
— Brian Patterson, Amazon.com

"In Renewing the Covenant Dr. Leet has made a brilliant contribution to the future of Jewish faith, with significant implications for Christianity and Islam as well. The scholarship, writing, and manifestations of personal insight and spiritual development are of the highest quality."
— Ralph Abraham, author of Chaos, Gaia, Eros
or
Not Currently Available for Direct Purchase
Copyright © 2020 American Booksellers Association