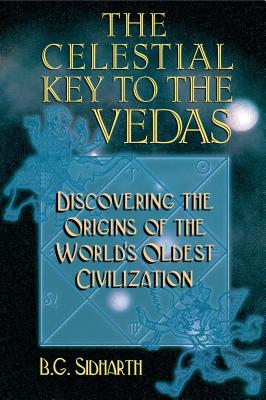 The Celestial Key to the Vedas

Discovering the Origins of the World's Oldest Civilization

A leading astronomer proves that India had a thriving civilization capable of sophisticated astronomy long before Greece, Egypt, or any other world culture.

• Provides conclusive evidence that the Rig Veda is 12,000 years old.

• Establishes actual dates and places for many of the events in the Hindu epics.

For more than a century scholars have debated the antiquity of the Vedas and their related literature, the Brahmanas and Puranas. Relying upon a host of assumptions from linguistic theory, anthropology, and archaeology, they have agreed upon 1500 b.c. as the earliest possible date for the Rig Veda, itself the oldest extant example of Indo-European literature. But in this groundbreaking book, astronomer B. G. Sidharth proves conclusively that the earliest portions of the Rig Veda can be dated as far back as 10,000 B.C.

By deciphering the astronomical events and alignments contained in mythical and symbolic form in these ancient texts, Sidharth calls into question many if not all of the assumptions governing Indo-European prehistory. He explores such subjects as the astronomical significance of many Hindu deities and myths, the system of lunar asterisms used to mark time, the identity of the Asvins, and the sophisticated calendar of the ancients that harmonized solar and lunar cycles. Sidharth provides incontrovertible evidence that such "advanced" astronomical concepts as precession, heliocentrism, and the eclipse cycle are encoded in these ancient texts, passages of which make perfect sense only if these astronomical keys are known. Based on internal evidence in the Mahabharata and Ramayana, he also becomes the first to establish likely dates--and even places--for the events described in these famous epics. The Celestial Key to the Vedas is sure to astonish anyone concerned with astronomy, India, or the roots of civilization.

B. G. Sidharth is director of India's B. M. Birla Science Center. He has over 30 years of experience in astronomy and science education and is a frequent consultant to astronomy journals and science centers around the globe. He lives in Hyderabad, India.
Loading...
or support indie stores by buying on