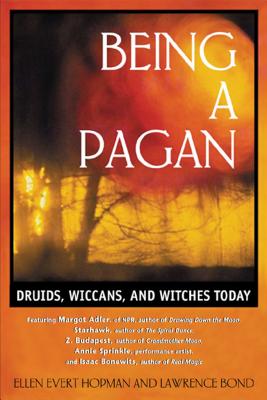 More than 60 pagan leaders and teachers describe in their own words what they believe and what they practice.

• Introduces the wide range of possibilities within the neo-Pagan movement.

• By Ellen Evert Hopman, author of A Druid's Herbal for the Sacred Earth Year; Walking the World in Wonder: A Children's Herbal; and Tree Medicine, Tree Magic.

Who are the pagans and what do they stand for? Why would some of the members of the best educated, most materially comfortable generation of Americans look back to mystical traditions many millennia old? During the last few decades, millions of people have embraced ancient philosophies that honor Earth and the spiritual power of each individual. Ways of worship from sources as diverse as the pre-Christian Celts, ancient Egypt, and Native American traditions are currently helping their followers find meaning in life while living in the Information Age.

In this book Pagan leaders and teachers describe in their own words what they believe and what they practice. From Margot Adler, an NPR reporter and author of Drawing Down the Moon, to Isaac Bonewits, ArchDruid and founder of a modern neo-Druidic organization, those interviewed in this book express the rich diversity of modern Paganism. Hopman's insightful questions draw on her own experiences as a Pagan and Druid as well as on her extensive research. With coauthor Lawrence Bond, she examines how Pagans address such issues as parenting, organized religion, and politics. The resulting dialogues illuminate the modern Pagan revival.

Praise For Being a Pagan: Druids, Wiccans, and Witches Today…

"This book should appear on the suggested reading list given to any student on a Pagan path."
— PanGaia: Living the Pagan Life

"Being a Pagan is well researched and offers a panoramic outlook on a growing spiritual movement offering hope for our Earth."
— New Age Retailer

"The collection is refreshingly unlike other spiritual self-discovery books because it is not a how-to, but instead an oral documentation of actual practice, thus providing an extremely valuable historiography of paganism."
— Small Press

"Hopman and Bond are evenhanded in their treatment of each individual expression of paganism, never setting one against the other. Their biases never show, which in itself is quite a feat. The questions asked are pertinent and probing. If you are not a pagan, this book is definitely for you. It does not seek to convert, only to inform and challenge your own faith, or lack of it. For both pagan and non-pagan, if nothing else, it will change your understanding of what it means to call oneself 'pagan.'"
— Brigit's Feast

"I cannot begin to describe how much I enjoyed this book! Being a Pagan made my December Top Ten list, and I firmly believe that this is a volume every witch should own. Containing dozens of interviews with every major leader of the modern Pagan movement, representing an equal number of paths, Traditions and perspectives, Hopman and Bond have created an invaluable resource for anyone interested in Earth-Based Spirituality."
— Stefani Barner, The Pagan Activist, Feb 2007

“In my personal journey through Being a Pagan I find many of the dimensions of those interviewed in this book relevant to my own journey. The stories/interviews of this book helped me define myself as a pagan/shaman. It is an important read for others in helping them find their place in the world of the coming New Age and in their relationship to paganism and witchcraft.”
— Nick Brink, author of The Power of Ecstatic Trance

Ellen Evert Hopman has been a teacher of herbalism since 1983 and is a professional member of the American Herbalists Guild. A member of the Grey Council of Mages and Sages and a former professor at the Grey School of Wizardry, she has presented at schools and workshops across the United States and Europe. A Druidic initiate since 1984, she is the current Archdruid of Tribe of the Oak (Tuatha na Dara), an international Druid Order, a founding member of The Order of the White Oak (Ord Na Darach Gile), a Bard of the Gorsedd of Caer Abiri, and a Druidess of the Druid Clan of Dana. A former vice president of The Henge of Keltria, she is the author of The Sacred Herbs of Spring; The Sacred Herbs of Samhain; Secret Medicines from Your Garden; The Real Witches of New England; Scottish Herbs and Fairy Lore; A Druid's Herbal of Sacred Tree Medicine; A Druid’s Herbal for the Sacred Earth Year; Walking the World in Wonder – a Children’s Herbal; Being a Pagan; Tree Medicine, Tree Magic; and the Druid trilogy of novels: Priestess of the Forest, The Druid Isle and Priestess of the Fire Temple. She lives in Massachusetts.

Lawrence Bond, a designer and illustrator whose work has been published internationally for more than a decade, is the art director of the music magazine Dirty Linen.
Loading...
or
Not Currently Available for Direct Purchase