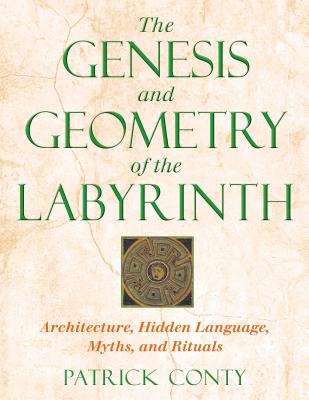 The Genesis and Geometry of the Labyrinth

A groundbreaking look at the phenomenon of the labyrinth, connecting this ancient symbol to modern scientific principles.

• Illustrated with labyrinths from around the world and throughout history.

• Demonstrates how the labyrinth differs from a maze and how it is a tool for interpreting ancient myths and religious beliefs.

• Draws parallels between the labyrinth and quantum physics, showing how through the secrets of the labyrinth we can unlock the mystery of life itself.

The powerful symbol of the labyrinth exists in countless cultures spanning the globe from Africa and ancient Greece to India, China, and pre-Colombian North and South America. For centuries they have been used for religious rituals, meditation, and spiritual and physical healing. In the labyrinth humanity finds a model of the quintessential sacred space that depicts the most profound levels of consciousness. Its center is regarded in many cultures as a door between two worlds, thus providing individuals with the ideal place for self questioning and meditation.

In a comprehensive exploration of this time-honored symbol, Patrick Conty shows how the geometrical construction of the ancient labyrinth corresponds exactly with today's modern geometry, illustrating that recent developments in math and physics parallel the science of ancient civilizations. By looking at the way the two systems complement each other, Conty draws new conclusions about the ancient world and how that world can benefit us right now. Conty explores not only physical labyrinths but also reveals how the same transcendent principles are at work in Celtic knot work; the designs of ancient Chinese cauldrons; the tattoos and tracings of primitive art; the textiles of Africa, Peru, and Central America; and the geometric patterns in Islamic art.

Praise For The Genesis and Geometry of the Labyrinth: Architecture, Hidden Language, Myths, and Rituals…

"Patrick Conty's fascinating study brings us face to face with the enigma of unity and reminds us that its most archaic expression--the labyrinth--begins and ends in ourselves."
— David Appelbaum, editor, Parabola

"Not only the most recent book to discuss this intriguing subject, but among its most clear and penetrating examinations."
— Frank Joseph, Fate, December 2003, Vol.56 No.12 Issue644

"This book invites readers to explore the ultimate patterns of the universe."
— Nexus, May/June 2004

Patrick Conty is a painter who has been researching labyrinths for more than 30 years. After 25 years in America, he now lives in the south of France.
Loading...
or
Not Currently Available for Direct Purchase