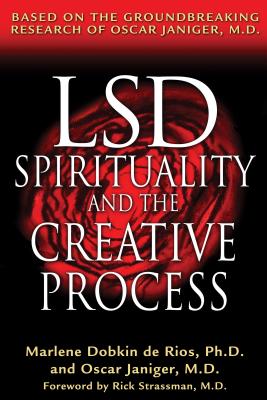 LSD, Spirituality, and the Creative Process

Based on the Groundbreaking Research of Oscar Janiger, M.D.

An exploration of how LSD influences imagination and the creative process.

• Based on the results of one of the longest clinical studies of LSD that took place between 1954 and 1962, before LSD was illegal.

• Includes personal reports, artwork, and poetry from the original sessions as testimony of the impact of LSD on the creative process.

In 1954 a Los Angeles psychiatrist began experimenting with a then new chemical discovery known as LSD-25. Over an eight-year period Dr. Oscar Janiger gave LSD-25 to more than 950 men and women, ranging in age from 18 to 81 and coming from all walks of life. The data collected by the author during those trials and from follow-up studies done 40 years later is now available here for the first time, along with the authors' examination of LSD's ramifications on creativity, imagination, and spirituality.

In this book Marlene Dobkin de Rios, a medical anthropologist who has studied the use of hallucinogens in tribal and third world societies, considers the spiritual implications of these findings in comparison with indigenous groups that employ psychoactive substances in their religious ceremonies. The book also examines the nature of the creative process as influenced by psychedelics and provides artwork and poetry from the original experiment sessions, allowing the reader to personally witness LSD's impact on creativity. The studies recounted in LSD, Spirituality, and the Creative Process depict an important moment in the history of consciousness and reveal the psychic unity of humanity.

Praise For LSD, Spirituality, and the Creative Process: Based on the Groundbreaking Research of Oscar Janiger, M.D.…

“There is no doubt about LSD’s enormous impact on creativity. Unfortunately most artists cannot talk openly about LSD use for their artistic creativity and personal spiritual growth because of the overshadowing ‘War on Drugs.’ This pioneering book shows the value of the psychedelic experience for creativity.”
— CHRISTIAN RÄTSCH, PH.D., author of Marijuana Medicine and coauthor of Plants of the Gods

“With LSD, Spirituality, and the Creative Process Marlene Dobkin de Rios provides a compelling account of the unique research program conducted by Oscar Janiger studying the effects of psychedelics on creativity. This important contribution should stimulate further investigations into this fascinating yet neglected field.”
— CHARLES S. GROB, M.D., professor of psychiatry, UCLA School of Medicine, and author of Hallucinogens

"[Grof's] research into these unmapped areas makes for a fine choice for any new age collection strong in modern consciousness."
— The Midwest Book Review, June 2009

"Dr. Grof has helped to give us new ways of seeing the world . . . He has opened a link between the psyche and the spirit."
— Nexus New Times Magazine, Sept-Oct 2009

Marlene Dobkin de Rios, Ph.D. (1939-2012), was a medical anthropologist, associate clinical professor of psychiatry and human behavior at the University of California, Irvine, and professor emerita of anthropology at California State University, Fullerton, where she taught cultural anthropology from 1969-2000. A former Fulbright scholar, she was the author of several hundred professional articles and eight books.

Oscar Janiger, M.D. (1918-2001), was one of the first American researchers to study the psychedelic drugs DMT and LSD and was the author of A Different Kind of Healing.

Rick Strassman, M.D., author of DMT : The Spirit Molecule, and co-author of Inner Paths to Outer Space, lives in Taos, New Mexico, and is Clinical Associate Professor of Psychiatry at the University of New Mexico School of Medicine.
Loading...
or support indie stores by buying on